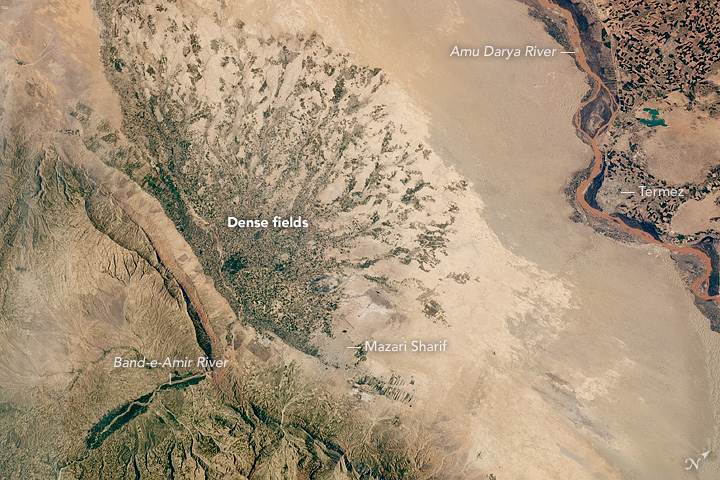 Taken through a window on the International Space Station by the EarthKAM camera, this photo shows dense clusters of agricultural fields radiating across a large alluvial fan in Afghanistan. Clusters of dark green fields stretch away from the hills like fingers across the Band-e-Amir alluvial fan. The river flows from a canyon in the hills (lower left) and exits at the apex of the fan. From this point, many canals lead the water across this large, flat plain, irrigating the fields and providing drinking water for a large population. The alluvial fan also provides softer sediments for plowing and sowing seed, as well as smooth surfaces for easy transport of crops to markets. Each dark cluster of fields has a market at its center.

Just about all of the water that comes out of the canyon is used by the people and the crops, resulting in little water flowing off the fan. Before agriculture, though, the Amir River flowed all the way (65 kilometers or 40 miles) from the apex of the fan to the brown Amu Darya River.

Compared with the rivers and fields, towns may be the least obvious features in this view from above. The main city, Mazari Sharif, is the third largest in Afghanistan (690,000 people) and has been famous for hundreds of years as a center of pilgrimage and trade in central Asia. The city of Termez (over the border in Uzbekistan) faces the Amu Darya.

For centuries, populations have been congregated on the numerous fans that dot the arid and semi-arid expanses of central Asia. Alexander the Great watered his army here in 329-328 BCE—fully 4000 kilometers (2500 miles) from Greece. His forces crossed the Amu Darya twice and introduced aspects of Greek culture that can be seen in this part of Asia to this day.

EarthKAM (Earth Knowledge Acquired by Middle school students) is a NASA educational outreach program that enables students, teachers, and the public to learn about Earth from the unique perspective of space. During Sally Ride EarthKAM missions, middle school students around the world request images of specific locations on Earth. The photo above was requested by students in Torun, Poland.

This EarthKAM photograph CCFID_103323_2016104095502 was acquired on April 13, 2016, with a Nikon D2Xs digital camera using a 50 mm lens, and is provided by Sally Ride EarthKAM@Space Camp on the International Space Station. The caption is provided by the Earth Science and Remote Sensing Unit, NASA Johnson Space Center. The image in this article has been enhanced to improve contrast. Caption by M. Justin Wilkinson, Texas State University, Jacobs Contract at NASA-JSC.

Clusters of dark green fields stretch away from the hills like fingers across this alluvial fan in Afghanistan.

Irrigation along the Shebelle River

The Shebelle River has its headwaters in the Ethiopian Highlands, and transports water and sediment 1,000 kilometers to the southeast across Ethiopia and into Somalia.