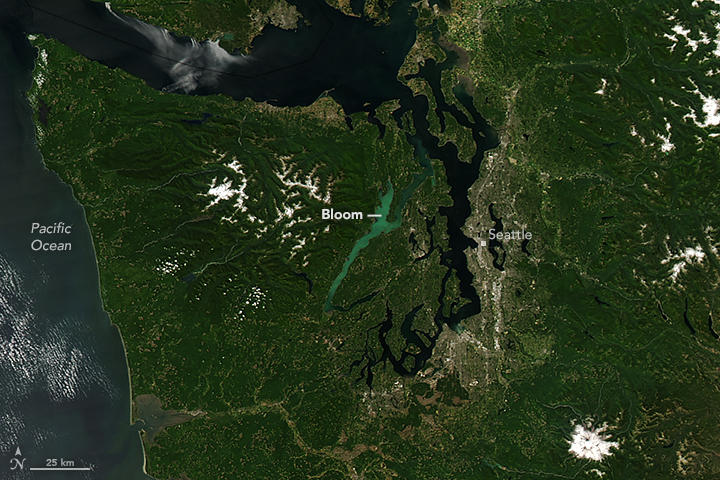 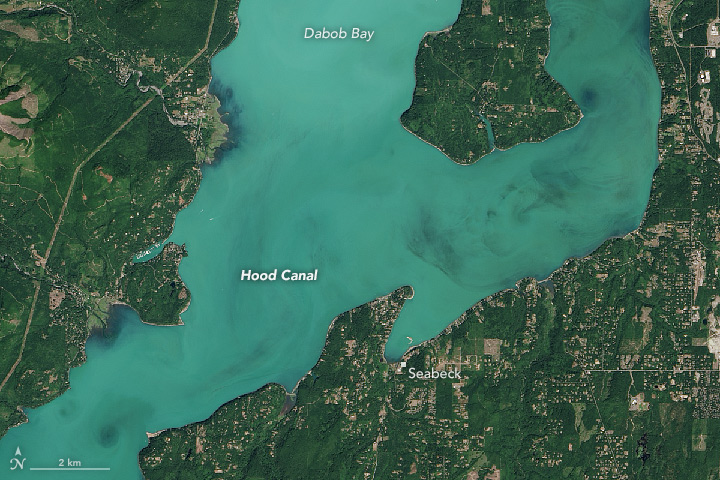 On July 24, 2016, the Moderate Resolution Imaging Spectroradiometer (MODIS) on NASA’s Aqua satellite acquired a natural-color image (top) of a phytoplankton bloom in Hood Canal—a fjord in Washington’s Puget Sound. The second image shows a more detailed view of the bloom on July 27 as observed by the Operational Land Imager (OLI) on the Landsat 8 satellite.

According to Jan Newton, an oceanographer at the University of Washington, Hood Canal can be quite a productive area. “It has also been very sunny lately, so that begets blooms,” she said.

On July 21, 2016, Teri King of Washington Sea Grant caught a glimpse of the bloom (below) while driving along Hood Canal; she was on her way to provide training for “SoundToxins,” a citizen-science monitoring program that documents harmful algal blooms, unusual bloom events, and new species entering the Salish Sea. King pulled over, grabbed a water sample, and confirmed that the color was due to a coccolithophore bloom. Coccolithophores are microscopic plankton that are plated with white calcium carbonate. The plates can impart a milky, turquoise hue to the water that is often visible from space. 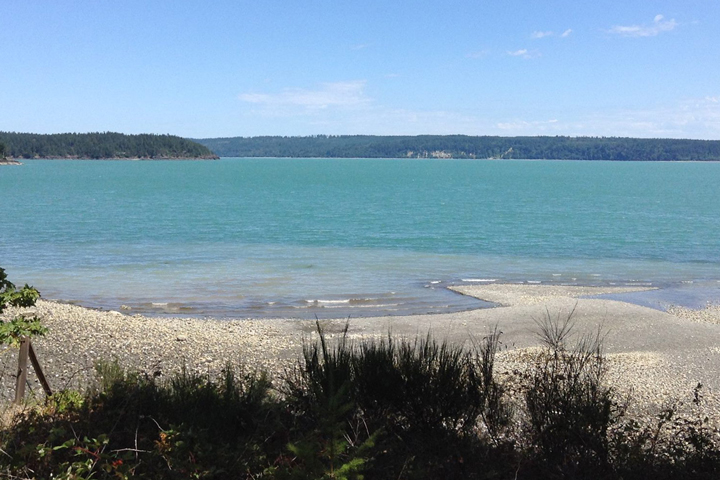 “It is hard to miss a bloom of this color,” King wrote on Facebook. “We don’t see them often, but when we do it is remarkable.” A large bloom of coccolithophore was previously observed in Hood Canal in July and August 2007, as documented by the Hood Canal Dissolved Oxygen Program.

The July 2016 bloom is expected to coincide with oyster spawning in Hood Canal, which should begin soon. “We don’t believe there will be a problem with the spawn and the bloom,” King said. “We are watching closely.”

According to Newton, blooms in Hood Canal are a concern because they could lead to hypoxia, the depletion of oxygen in the water. Coccolithophores make their shells out of one part carbon, one part calcium, and three parts oxygen (CaCO3). “This carbon will eventually be respired as microbes break it down, typically at depth,” she said. “And that adds to an oxygen draw-down.”