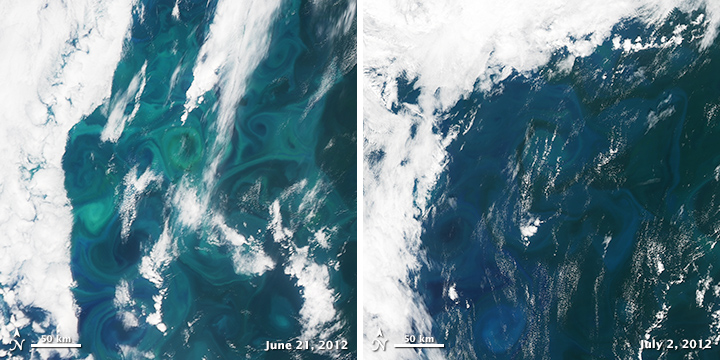 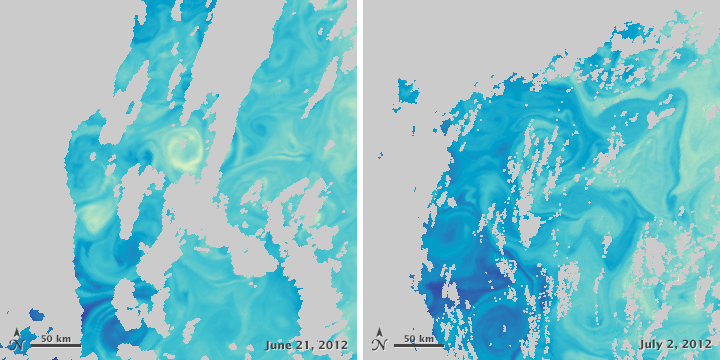 Given the right mix of nutrients, sunlight, and water temperatures, phytoplankton can explode into blooms large enough to be visible from space. But what factors lead to the demise of these floating masses of microscopic organisms? Sometimes viruses are to blame.

The impact of viruses on phytoplankton was demonstrated by recent research that used satellite and ocean-based data to measure the complete life cycle of a large bloom of Emiliania huxleyi, an abundant species of the single-celled coccolithophore.

"We showed that such big blooms can collapse within a short period of a few days as a result of viral infection," said Ilan Koren of the Weizmann Institute of Science. "The ecological and climate implications of such phenomena are huge." That's because phytoplankton play an important role in cycling carbon dioxide from the atmosphere and through the ocean ecosystem.

The images above, from the Moderate Resolution Imaging Spectroradiometer (MODIS) on NASA’s Aqua satellite, show the coccolithophore bloom studied by Koren and colleagues. The top-left image was captured on June 21, 2012, when the bloom was thriving, and the top-right image was captured on July 2, 2012, as the bloom faded. Images on the bottom show the concentrations of chlorophyll on those days as derived by MODIS. Chlorophyll is a light-harvesting pigment used by phytoplankton to carry out photosynthesis, and allows scientists to map the amount and location of plankton.

In this patch of the North Atlantic between Greenland and Iceland, the researchers found that the physical factors known to affect bloom dynamics—such as water temperature and salinity—were relatively stable throughout the the bloom area. "Therefore in such patches any observed change can be attributed to biology," Koren said.

The researchers set out to learn which biological factors were at work. Inadequate nutrients and grazing by predators have been known to deplete blooms. In this case, however, samples of ocean water were found to contain high levels of the Emiliania huxleyi virus, which infects the cells of this species of coccolithophore.

"There is good evidence that the demise of blooms can be driven by viruses," said phytoplankton ecologist Mike Behrenfeld of Oregon State University. "However, I think there is still a lot of work to do in terms of understanding how common this is on a global basis."

The 2012 North Atlantic bloom spanned about 60 miles (almost 100 kilometers) and produced about 24,000 tons of organic carbon. It remains unclear whether the carbon was recycled back to the atmosphere or if it underwent a process that helped it sink to the bottom of the ocean. The answers would help scientists better understand the precise ecological and climate impacts.