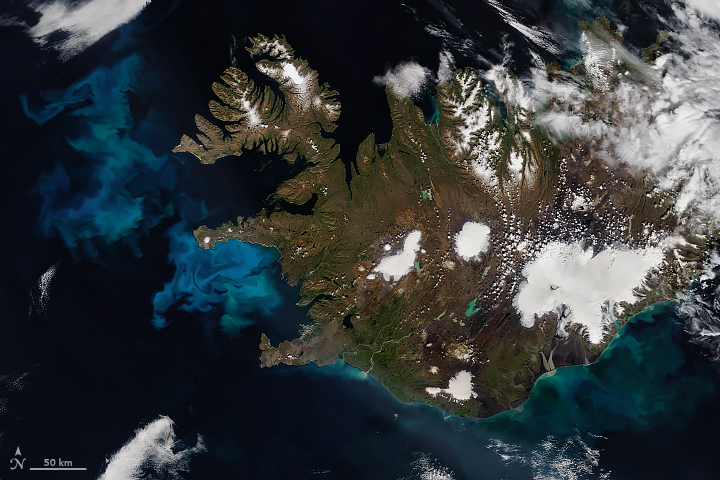 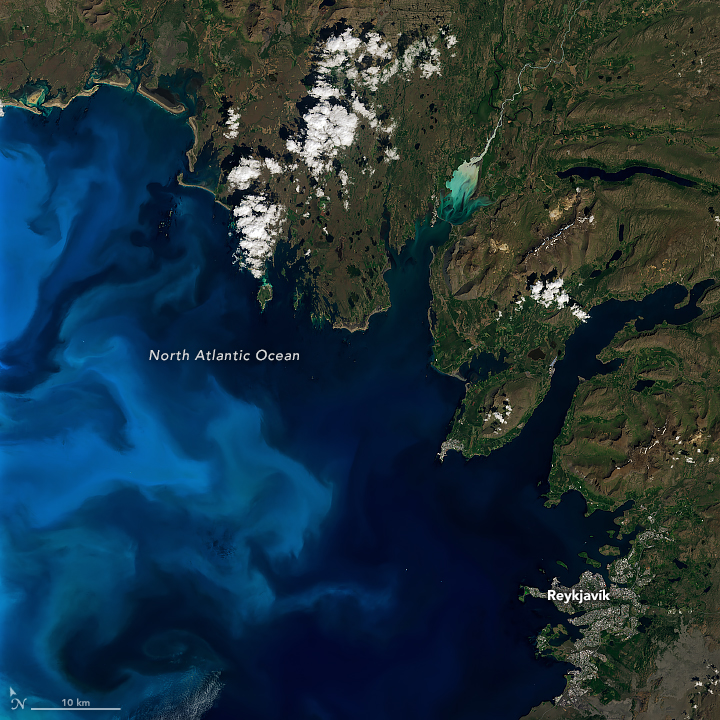 There is nothing unusual about this mid-summer pop of color in the waters off of Iceland. July 2019 brought the latest display of a phytoplankton bloom that occurs every year in the North Atlantic Ocean. Yet we never tire of watching it. The blooms trace the day’s patterns of surface water flow, and no two views are ever the same.

“The structure of the bloom clearly shows the influence of ocean circulation on the distribution and concentration of phytoplankton,” said Michael Behrenfeld, a phytoplankton ecologist at Oregon State University.

The Moderate Resolution Imaging Spectroradiometer (MODIS) on NASA’s Aqua satellite acquired the wide image of the bloom (top) on July 6, 2019. The second image shows a detailed view on July 7, acquired with the Operational Land Imager (OLI) on Landsat 8.

A bloom is essentially an abundance of phytoplankton—a plant-like organism that is important for carbon cycling and also could influence clouds and climate. They are also a critical part of the ocean’s food chain and support Iceland’s productive fisheries.

Without water samples, it is not possible to say for sure what species are present. The bloom could contain diatoms, a microscopic form of algae with silica shells and plenty of the chlorophyll, which has a green pigment. They are one of the most common types of phytoplankton in the ocean. Or the bloom could contain coccolithophores, which are plated with white calcium carbonate that can give the ocean a milky hue.

Whichever species is flourishing here, they are doing so right on time. The explosion of phytoplankton numbers, or “bloom,” tends to happen first at lower latitudes. By spring and mid-summer, blooms become common at high latitudes of the North Atlantic.

We see phytoplankton from space when they reach high concentrations at the ocean’s surface, but they are still present earlier in the year at various depths. Research into the timing and cause of blooms in the North Atlantic have shown that populations start to increase as early as winter.