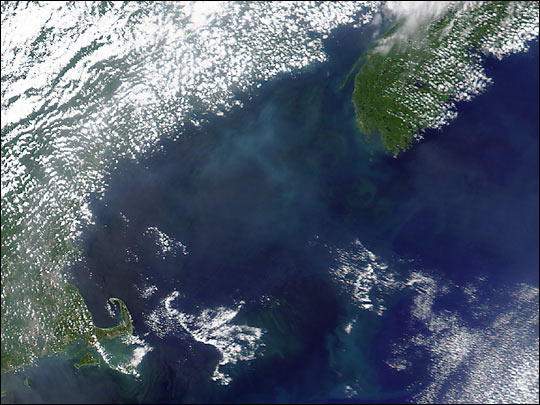 Earlier this summer, trillions of calcite (limestone) coated phytoplankton, known as coccolithophores, appeared in the waters off the coast of Maine. This true color image of the coccolithophore bloom was acquired on July 11, 2002, by the Moderate-resolution Imaging Spectroradiometer (MODIS), flying aboard NASA’s Terra spacecraft. The bloom is the large bluish-green patch in the center of the image in the Gulf of Maine.

Unlike any other plant in the ocean, coccolithophores surround themselves with microscopic plating made of calcite. These scales, known as coccoliths, are shaped like hubcaps and are only three one-thousandths of a millimeter in diameter. What coccoliths lack in size, they make up in volume. At any one time a single coccolithophore is attached to or surrounded by at least 30 scales. Additional coccoliths are dumped into the water when the coccolithophores multiply asexually, die or simply make too many scales. In areas with trillions of coccolithophores, the waters will turn an opaque turquoise from the dense cloud of coccoliths. (Click to read more about coccolithophores.)

Though there are always coccoliths in the Gulf of Maine, the area hasn’t seen a bloom like this one since 1989. Currently, NASA researchers are studying the bloom aboard a ferry in the gulf in an attempt to measure the bloom’s density and depth. So far the bloom appears to be about 20 to 25 meters thick and contains nearly half a million tons of calcite. 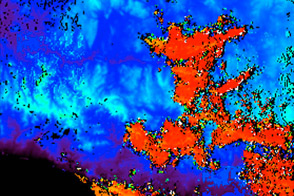 A break in the clouds provided a window to a brilliant display of color in the Barents Sea north off Norway on August 1, 2007. The bright aquamarine hues suggest that this is likely a coccolithophore bloom.