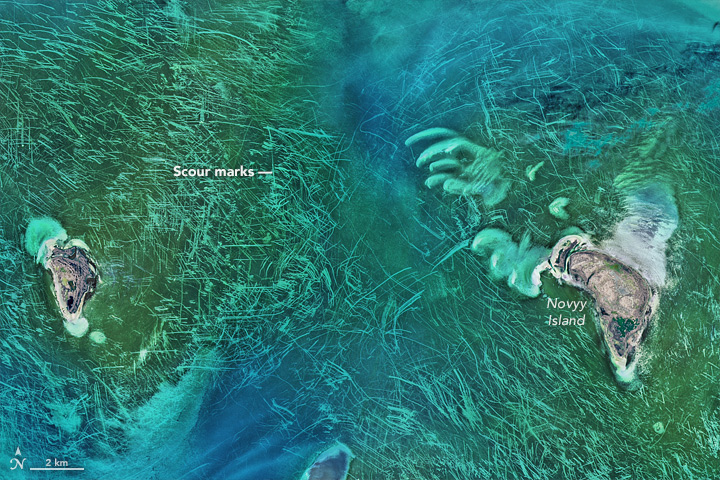 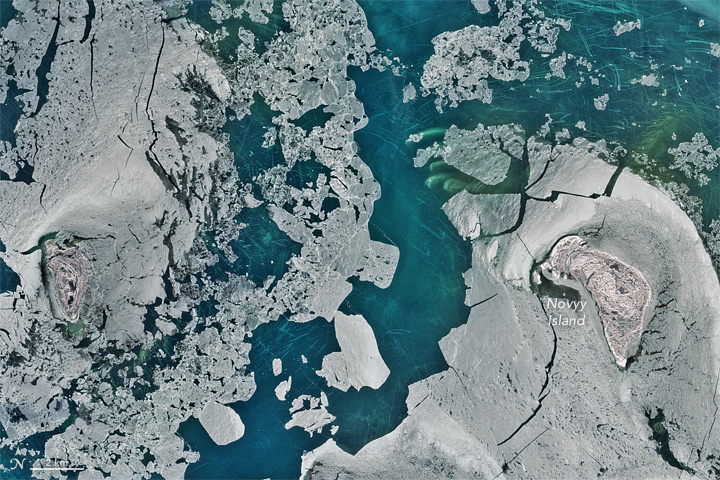 In early April 2016, ocean scientist Norman Kuring of NASA’s Goddard Space Flight Center found a puzzling image that showed lines crisscrossing the North Caspian Sea. On its own, the image was strikingly beautiful. Shallow waters surrounding the Tyuleniy Archipelago allow you to see the dark green vegetation on the sea bottom. But the question remained: what caused those lines?

The Operational Land Imager (OLI) on the Landsat 8 satellite acquired these natural-color images of the curious scour marks. The first image was acquired on April 16, 2016. The second was acquired on January 17, 2016, when parts of the sea were still frozen. The downloadable large image shows a wider view of the Caspian Sea around the Tyuleniy Archipelago on April 16.

The dark green areas—possibly sea grass or benthic algae—and the lines are features of the sea bottom. “You can tell this by the fact that marks laid down in January have not moved by April,” Kuring said. “If those were water features, they would not persist through one tidal cycle.”

It’s possible that some of the marks have a human origin. Similar lines show up in the world’s oceans because of trawling. But the scientific literature and the January satellite image suggest that a majority of the marks in the images above were gouged by ice. Turn on the image comparison tool to see the seasonal change. In January, blocks of ice stand at the leading end of many lines, most notably in the northeast corner of the image. By April, ice has melted and only the scour marks persist.

Stanislav Ogorodov, a scientist at Lomonosov Moscow State University who has published research on the phenomenon, agrees: “Undoubtedly, most of these tracks are the result of ice gouging.” Ogorodov notes that this part of the Caspian is very shallow—about 3 meters deep. Ice that forms here in wintertime is usually about 0.5 meters thick, so most of it never touches the seafloor. But the ice tends to be “warm” and thin, which gives rise to relatively weak ice cover that is easily deformed by wind and currents. When pieces of ice are pushed together, some ice is forced upward and downward into so-called “hummocks.” The keels of hummocks, frozen into the ice fields, can reach the seafloor and scour the bed as the ice moves.

Curious gouges on the shallow seafloor were formed by ice that topped the sea in wintertime.