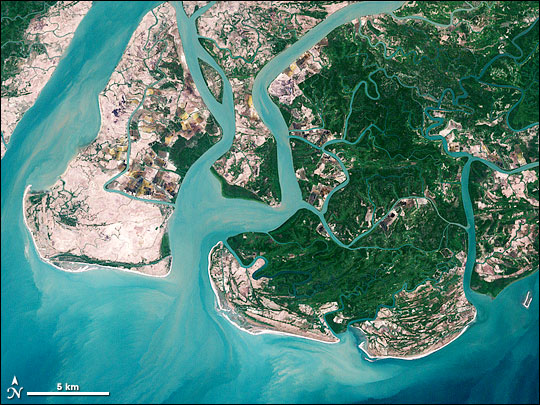 Rice is the most important food grain in Burma (Myanmar). Nearly 60 percent of the country’s total rice crop comes from the 4 states that occupy the Irrawaddy River Delta and adjacent coastline to the east, around the Gulf of Martaban. These areas suffered the worst devastation from the passage of Cyclone Nargis in early May 2008. According to a report from the USDA Foreign Agricultural Service (FAS), the impacts on food supplies and rice production this year could be severe.

The expansion of rice cultivation in the Irrawaddy River Delta has come at the expense of mangrove forests. Mangroves are salt-tolerant, evergreen forests; their dense, tangled, partially submerged root systems blunt the force of strong waves, protecting inland areas from erosion and flooding. This image from the Landsat satellite from March 3, 2000, shows how the clearing of the natural mangrove forests has left low-lying cropland and villages exposed to the sea. Mangrove forests appear deep green, traced by blue-green, sediment-laden streams. At the time of the image, many rice-growing areas were fallow, and the bare ground appears pinkish tan. Tree-lined streams appear as green veins across the cropland.

According to the FAS report, the damage to the country’s food supplies and cropland was multi-faceted. Farmers in the area grow two main rice crops a year: one in the dry season (November to May), which is irrigated, and one in the wet season (June-January), which is rain-fed. Much of the just-harvested, dry-season crop, which represents a 5-9 month food supply for many residents, was probably destroyed or contaminated. Rice seeds may also have been lost.

In addition, the 12-foot storm surge inundated approximately 1.75 million hectares (6,757 square miles) of rice-growing areas with salt water. Any seedlings that had been planted for the upcoming wet-season crop were probably severely damaged or destroyed. Rice has some tolerance to salt, but high salt concentrations can affect plant density and grain production. The saltiest areas will have to be drained and flushed with fresh water before they can be re-planted. Draining them may be challenging, however, since the fields are specifically designed to retain rainwater.

NASA image by Robert Simmon, based on Landsat-7 data from the USGS Global Visualization Viewer. Caption by Rebecca Lindsey.

The clearing of the natural mangrove forests has left low-lying cropland and villages exposed to the sea.