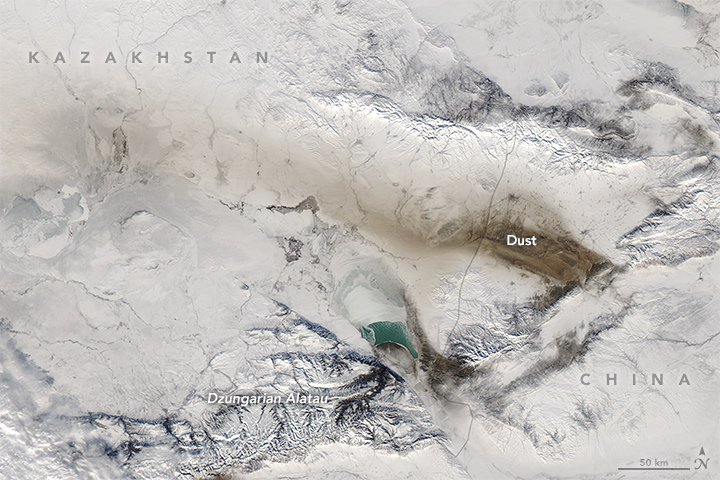 On January 27, 2016, the Moderate Resolution Imaging Spectroradiometer (MODIS) on NASA’s Aqua satellite acquired this image of dust laying on top of snow in Central Asia. But the question is: what was the source of the dust, and how did it get there?

“It certainly looks like silt or fine-grained material that was wind-swept onto the snow,” said Kimberly Casey, a cryospheric scientist at NASA’s Goddard Space Flight Center. She notes that the dust appears to originate at a point in northwestern China (47°N, 81°E), and it extends for about 400 kilometers (250 miles) northwest into Kazakhstan near Lake Alakol. Click here to see the scene in the Worldview browser. Within the browser, you can zoom in and out and step back a few days in time to watch the feature grow. The dust first appears on January 21.

“The snow appears to melt and then the exposed area contributes to locally generated dust that spreads west-northwestward,” said David Giles, a programmer and analyst with the AERONET aerosol research program at NASA Goddard.

Casey wondered if the source area is in a topographic depression, such as a river bed. “Perhaps a river or canyon bottom is dried in the winter, and the fine-grained silt is easily transported by wind.”

The explanation is a plausible one, and supported by a few additional clues. The maps below show various views of the scene created by draping the Aqua MODIS image over a digital elevation model based on NASA’s Shuttle Radar Topography Mission (SRTM). These three-dimensional views show how the dusty area is bounded on each side by ridges. 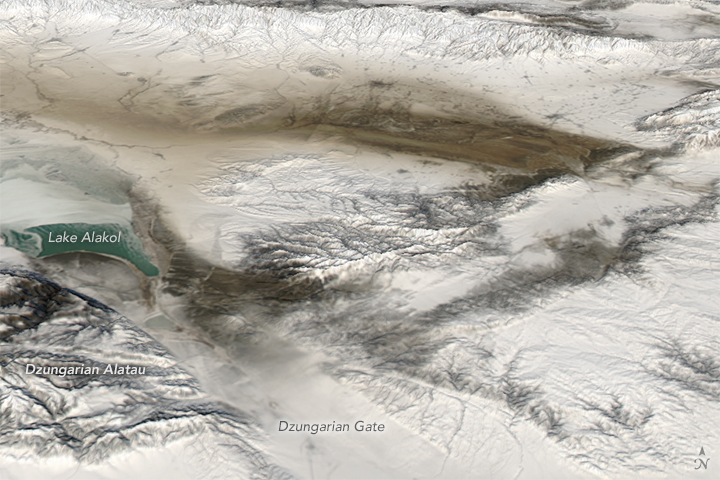 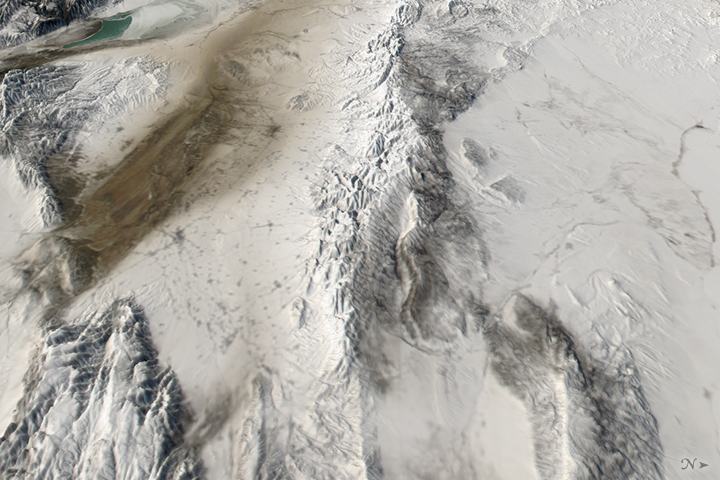 But were the winds favorable for moving that silt in the right direction? To find out, Giles used the NOAA Hybrid Single Particle Lagrangian Integrated Trajectory Model. “The HYSPLIT trajectory analysis suggests winds may have been east-southeasterly due to an anticyclone located to the north of this location,” Giles said. “That would correlate to the transport of dust west-northwestward from the exposed area, north of Lake Alakol.”

A swath of dust tops the snow in Central Asia, but the question is: what was the source of the dust, and how did it get there?