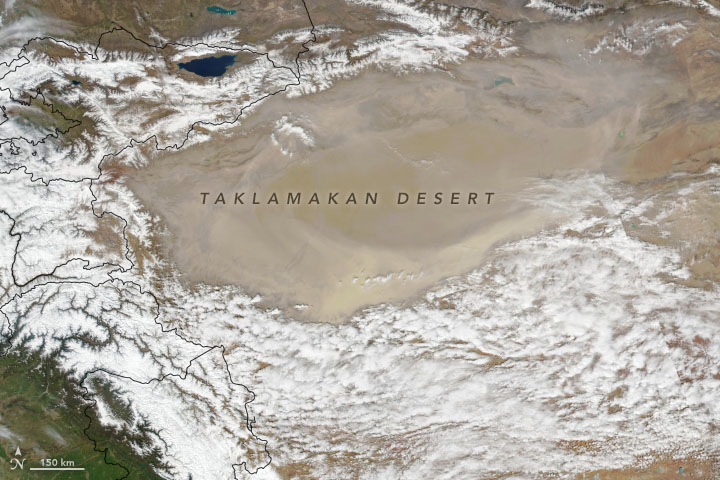 Among the most useful and longest-lived dust-monitoring sensors in space today is the Moderate Resolution Imaging Spectroradiometer (MODIS) on NASA’s Terra and Aqua satellites. Terra MODIS has collected more than 20 years of dust data; Aqua MODIS has observed for 18 years.

“Two decades is long enough to look for meaningful trends in atmospheric dust,” said NASA atmospheric scientist Hongbin Yu. In a new study in Atmospheric Chemistry and Physics, Yu and colleagues detailed their efforts to do just that. “We looked at the world’s six major dust outflow regions. We found lots of year-to-year variability, but in most areas we did not see obvious increases or decreases in dust. The one exception was the area we defined as the northwestern Pacific. In other words, the dust that blows east from deserts in western China and Mongolia, such as the Taklamakan and Gobi deserts.”

In this area, dust activity has declined since the early 2000s. Over the course of the MODIS record, the researchers found a 1.5 percent decrease in the atmospheric dust detected by the sensor each year. “More detailed analysis showed that the trend was due to changes in the spring—March, April, and May,” said Yu. “Trends were negligible in other seasons.”

Scientists using other sensors and analysis techniques have noted the same pattern. Ground-based lidars in Japan detected a 4.3 percent decrease in spring dust. A team of Chinese scientists analyzed data from ground-based weather stations and an atmospheric model and concluded that spring dust storm frequency in arid and semiarid regions of China had decreased by 15 storms per year on average over a period of 25 years.

Several research teams have addressed the obvious question: why? “There are three main factors that people have looked at: changes in winds, changes in vegetation cover, and changes in soil moisture,” said Yu. Changes in wind speeds, as well as wind shear, can affect how much dust winds can pick up. The presence of vegetation reduces how much dust winds can lift. And winds more easily lift dust from drier surfaces than wetter ones.

“I haven’t personally tested which of these is the most important,” said Yu. “Based on what I have seen in the scientific literature, it is likely that a combination of all three is contributing to the decline.”

For instance, some research shows a weakening in the polar vortex over the past few decades, a change that would limit the number of cold fronts (which elevate dust) and reduce maximum wind speeds of storm systems. Several studies also show increases in green vegetation and forests, likely due to global warming, reforestation projects, and efforts to prevent overgrazing.