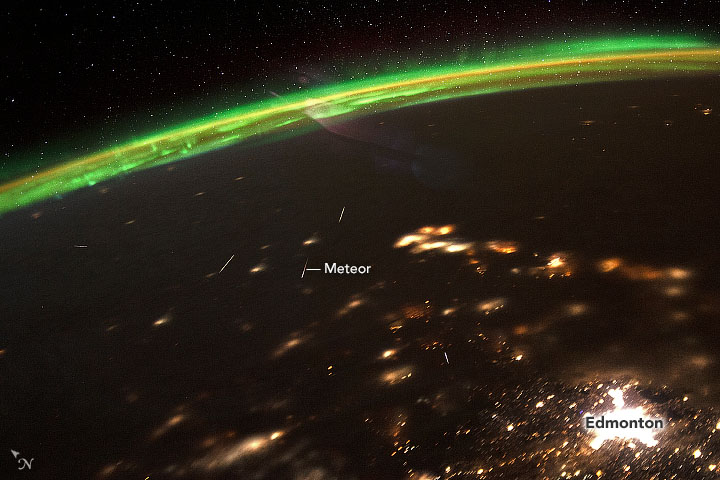 Every January, bits of asteroid 2003 EH1 cross paths with Earth’s orbit to create a beautiful annual meteor shower: the Quadrantids. As the fragments collide with our atmosphere, they disintegrate and create fiery and colorful streaks in the sky. On January 4, 2020, astronauts saw the spectacle from above.

The composite image above was taken by astronaut Christina Koch as the International Space Station (ISS) passed over Edmonton, Canada, around 4:30 a.m. local time (11:30 UTC). She also captured an aurora over the region around the same time. The image below shows the position of the aurora in relation to the ISS orbit. The image was created using data from the Visible Infrared Imaging Radiometer Suite (VIIRS) “day-night band” from the Suomi National Polar-orbiting Partnership and Black Marble data.

“Meteors fly by the ISS all the time, but the astronauts don’t see them. The meteor is just a little piece of rock, but it is so dark and moves so fast that you don’t see it whiz by,” said Bill Cooke, lead at the NASA Meteoroid Environment Office. “Astronauts see the meteors when they look down and see them burning up near Earth’s atmosphere, appearing as streaks of light.” 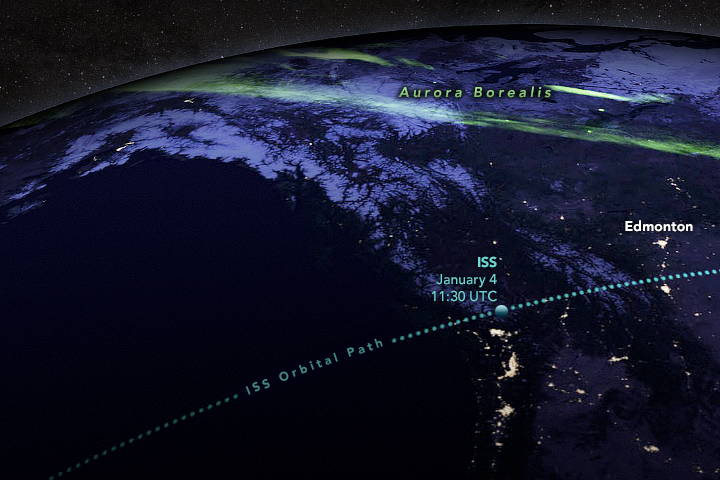 Quadrantids are generally faint but periodically have bright fireball meteors—large explosions of light and color. Fireballs last longer than the average meteor streak because they are born from larger pieces of material. The bright meteors in Koch’s picture are fireballs. Even from space though, astronauts may struggle to see the flashes due to bright city lights below or from the moonlight, said Cooke.

The Quadrantids differ from most meteor showers. While the majority of meteor showers originate from comets, the Quadrantids appear to come from an asteroid. As asteroid 2003 H1 travels around the Sun, it sheds dust. This dust gradually spreads into a debris trail, which Earth passes through in early January every year. Discovered in 2003, asteroid 2003 EH1 is small and measures only about two miles (three kilometers) in diameter. However, some scientists think it might be related to a dead comet called C/1490 Y1 or fall under a new type of object called a “rock comet.”

At its peak, the Quadrantids register around 80 meteors per hour observed in an area. Peak activity only lasts for a few hours (as opposed to days as with other meteor showers) because of the thinner stream of particles. Earth also crosses through the stream at a perpendicular angle. The meteors are best viewed in the Northern Hemisphere.

Astronaut Chris Hatfield once wrote that seeing a meteor from space was a “reminder of living in a shooting gallery.” However, the chances of the ISS getting hit by a small meteor are low. Cooke says the ISS is armored against meteors and the odds of a meteor penetrating the station is very small. The greatest risk occurs when an astronaut is outside of the space station performing a spacewalk and could potentially come into contact with a small meteor. Cooke’s office generates meteor forecasts to help assess the safety for astronauts venturing outside the station.

NASA Earth Observatory image by Joshua Stevens, using VIIRS day-night band data from the Suomi National Polar-orbiting Partnership and Black Marble data from NASA/GSFC. Astronaut photograph composite including ISS061-E-119857 was acquired on January 4, 2020, with a Nikon D5 digital camera using a 28 millimeter lens and is provided by the ISS Crew Earth Observations Facility and the Earth Science and Remote Sensing Unit, Johnson Space Center. The image was taken by a member of the Expedition 61 crew. The image has been cropped and enhanced to improve contrast, and lens artifacts have been removed. The International Space Station Program supports the laboratory as part of the ISS National Lab to help astronauts take pictures of Earth that will be of the greatest value to scientists and the public, and to make those images freely available on the Internet. Additional images taken by astronauts and cosmonauts can be viewed at the NASA/JSC Gateway to Astronaut Photography of Earth. Story by Kasha Patel.