A Fault Runs Through It 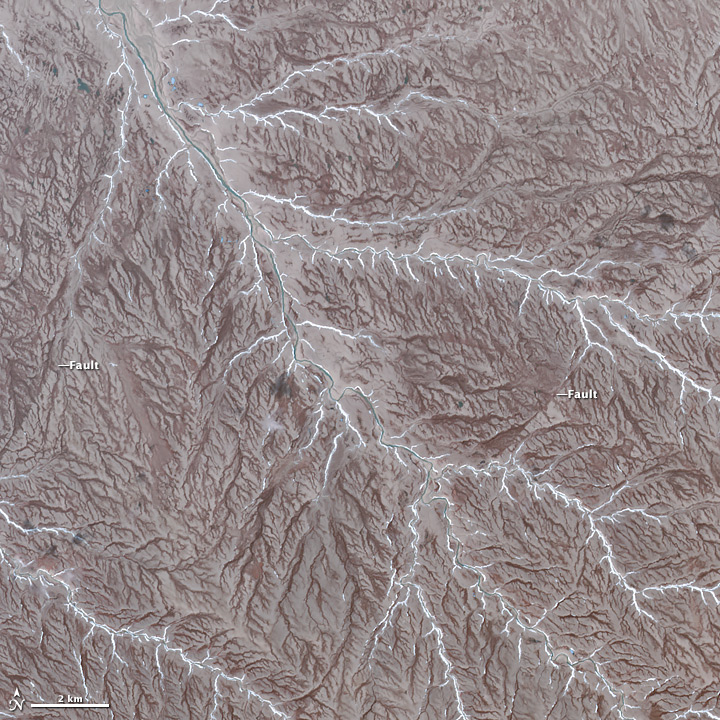 Prince Patrick Island can hardly be described as hospitable. For three months a year, the Sun does not rise. January temperatures average about -33 degrees Celsius (-27 degrees Fahrenheit). Sea ice usually hems in the northern Canadian island for the entire year.

Aside from an old runway and a handful of crumbling buildings from a defunct weather station, there are few signs of human activity on Prince Patrick Island. Instead, an abundance of streams dominate the terrain. In this image acquired on July 2, 2011, by the Advanced Spaceborne Thermal Emission and Reflection Radiometer (ASTER) on NASA’s Terra satellite, a web of interlocking stream and river channels have carved dendritic drainage patterns into many parts of the island. The image highlights waterways in the hilly northeastern part of the island; they generally flow toward the northern coast of the island. River water appears blue; the white tendrils connecting to the main channel are most likely snow or ice. Stream channels appear darker than the surrounding surface.

The island is tectonically active. Note the faint lines running through the upper part of the image, where the stream channels are slightly offset. These are strike-slip faults—cracks in underlying blocks of rock that meet and slide past each other. In the past 40 years, seismic equipment has detected seven earthquakes of magnitude 4.0 or higher on the Richter scale. The strongest, a 5.7 quake, occurred in December 1999.

For a broader view of the faults, download a larger version of the image.

Look for the slight offset in stream channels on Prince Patrick Island caused by a strike-slip fault.