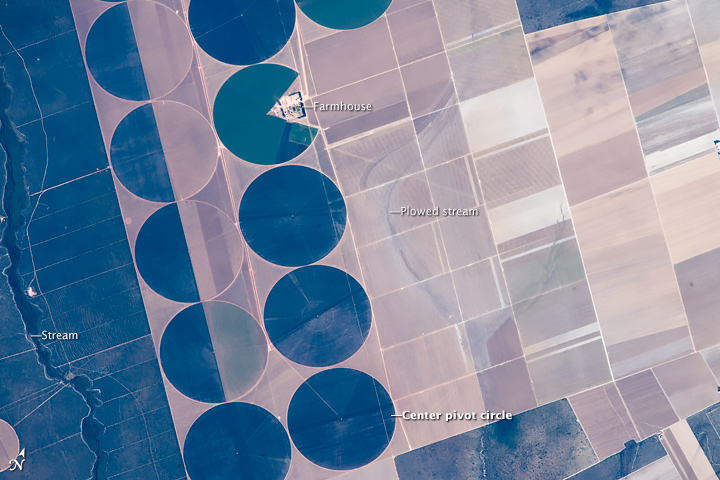 In 2013, this part of Bahia State in Brazil included just a single center-pivot irrigation circle. In this photograph taken in 2015 by an astronaut on the space station, new circles—each about 2 kilometers (1.2 miles) in diameter—are tightly packed and overlaid on the original rectangular farm grid. Like a Pac-Man, one circle appears to be swallowing a farm house. The ragged lines of a forested stream (left) contrast with the sweeping, ghostly shapes of plowed stream beds (image center).

As Brazil’s economy rapidly expands, center-pivot technology is being introduced to counter the effects of irregular rains and drought in Bahia’s drier interior. Agribusiness crops grown in this part of the state include soy beans, corn, cotton and sisal. The nearby town of Magalhães has experienced the fastest growth in all of Brazil, as its population more than doubled between 2004 and 2007.

Astronaut photograph ISS044-E-22556 was acquired on July 26, 2015, with a Nikon D4 digital camera using an 1150 millimeter lens, and is provided by the ISS Crew Earth Observations Facility and the Earth Science and Remote Sensing Unit, Johnson Space Center. The image was taken by a member of the Expedition 44 crew. The image has been cropped and enhanced to improve contrast, and lens artifacts have been removed. The International Space Station Program supports the laboratory as part of the ISS National Lab to help astronauts take pictures of Earth that will be of the greatest value to scientists and the public, and to make those images freely available on the Internet. Additional images taken by astronauts and cosmonauts can be viewed at the NASA/JSC Gateway to Astronaut Photography of Earth. Caption by M. Justin Wilkinson, Texas State University, Jacobs Contract at NASA-JSC.

As Brazil’s economy rapidly expands, center-pivot technology is being introduced to counter the effects of irregular rains and drought in the drier interior.