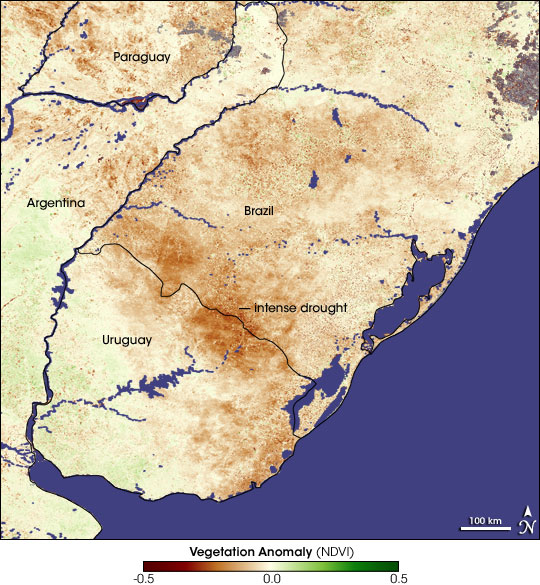 Rio Grande do Sul, the part of Brazil in the center of this image, is one of Brazil's richest states. Called the breadbasket of the south, the state is Brazil's largest rice producer, second largest wheat producer, and third largest corn and soybean producer. Despite these impressive numbers, none of these is the largest agricultural industry in Rio Grande do Sul; that distinction goes to the meat industry, where much of the corn ends up as feed.

During the summer of 2004/2005, this heavily agricultural region plunged into severe drought, its worst in 35 years. Little rain fell between December and March, the summer months in the Southern Hemisphere, and the cost to agriculture could measure in the billions, according to local news reports.

The effects of the drought on vegetation are clearly visible in this vegetation anomaly image. The image, a composite of data collected by NASA's Moderate Resolution Imaging Spectroradiometer (MODIS), shows where vegetation was less dense and healthy than normal between March 22 and April 6, 2005, compared to data collected during the same period between 2000 and 2004. Drought-affected areas are brown, while the few regions with denser vegetation than average are green. Most of the region is clearly drier than normal, but the most severely affected region straddles the border between Uruguay and Brazil.