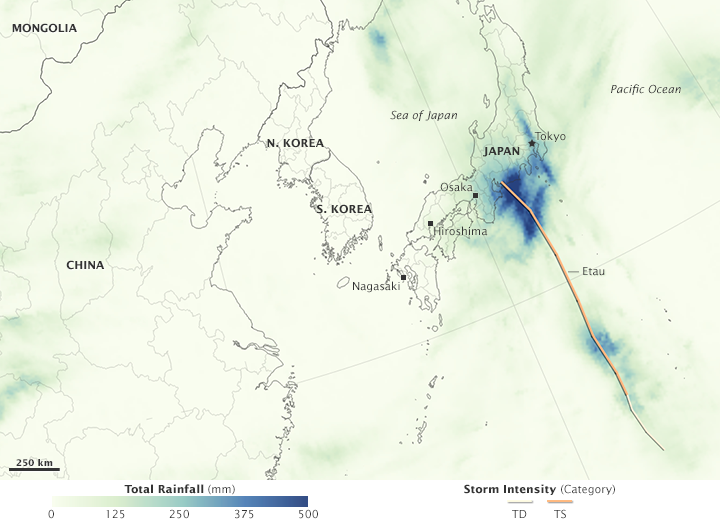 Before it made landfall in Japan, Tropical Storm Etau did not have the characteristics that usually excite weather watchers. Neither its winds nor its central pressure reached typhoon status; the storm surge was not remarkable because the storm had little time to churn the seas. Visually, the storm lacked the symmetry and tight eye that can make cyclones both frightening and beautiful.

But Etau, also known as Tropical Storm 18, made a devastating impression on eastern and central Japan in September 2015. The storm dropped torrential rainfall as it crossed the island nation, and then a combination of weather conditions stalled its movement and provoked record-setting rainfall in several cities. Swollen rivers burst their banks on September 10 and caused flooding in Tochigi and Ibaraki prefectures, east and north of Tokyo.

The map above shows satellite-based estimates of rainfall totals and locations from September 6–10, 2015, as compiled by NASA. Note that rainfall totals are regional, remotely-sensed estimates, and local amounts reported by ground-based weather stations can be significantly higher. The rainfall data come from the Integrated Multi-Satellite Retrievals for GPM (IMERG), a product of the Global Precipitation Measurement mission. IMERG pulls together precipitation estimates from passive microwave and infrared sensors on several satellites, as well as monthly surface precipitation gauge data, to provide precipitation estimates between 60 degrees North and South latitude. GPM is a partnership between NASA and the Japan Aerospace Exploration Agency.

The natural-color image below was acquired on September 8, 2015, by the Moderate Resolution Imaging Spectroradiometer (MODIS) on NASA’s Aqua satellite. 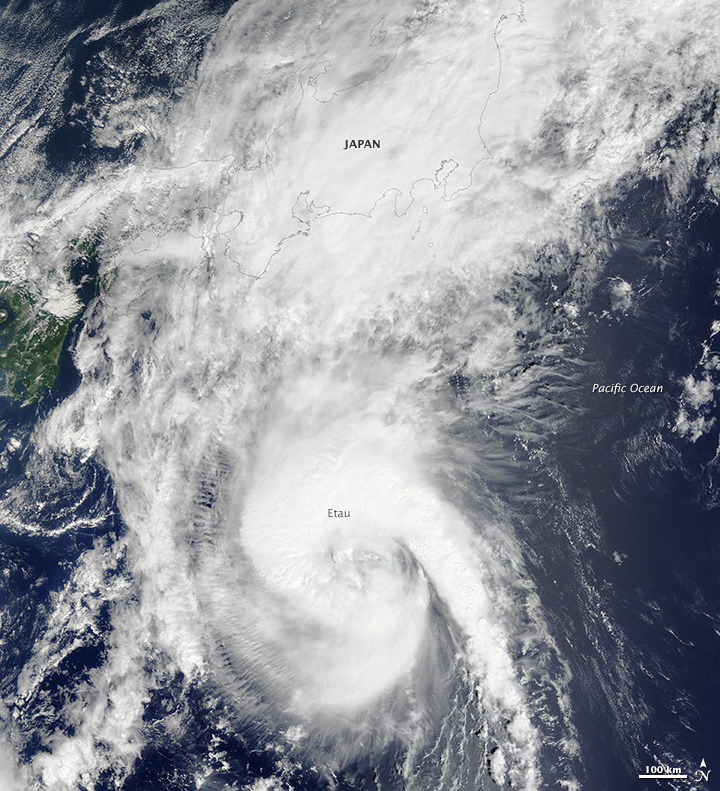 Weather stations in Tochigi and Ibaraki prefectures reported more than 500 millimeters (20 inches) of rain in 24 hours—double the amount that typically falls in the entire month of September. A Japan Meteorological Agency station in Nikko reported 668 millimeters (26.3 inches) of rain from September 6–10. News media and some meteorologists referred to Etau as a “100-year event,” and daily totals at several weather stations were the highest in forty years of record-keeping.

The Japan Times explained the confluence of weather conditions that led to the deluge:

The heavy rainfall in Tokyo and surrounding prefectures was caused by stationary humid air...which was unable to move in any direction. It was hemmed in to the west by a chunk of cold air over the Sea of Japan, where Typhoon Etau fizzled out, and a block of humid air to the east over the Pacific Ocean, where Typhoon Kilo was swirling, according to Kunihiro Naito, a forecaster at Weathernews Inc...

The rains caused more than 60 landslides and filled rivers to their banks. In the city of Joso, on the banks of the Kinugawa River, a 30-meter-wide by 4-meter tall earthen levee failed on September 10, leading to destructive flooding in the area. At least nine people were missing and at least 7,000 homes and buildings were damaged or destroyed as the flood water spread out across 37 square kilometers (14 square miles). Levees and embankments were also breached in Koga and Chikusei, while two bridges were washed away in Minami-Aizu. Media outlets reported that as many as 200,000 Japanese citizens were evacuated because of the floods.