Forests of the Cal Madow 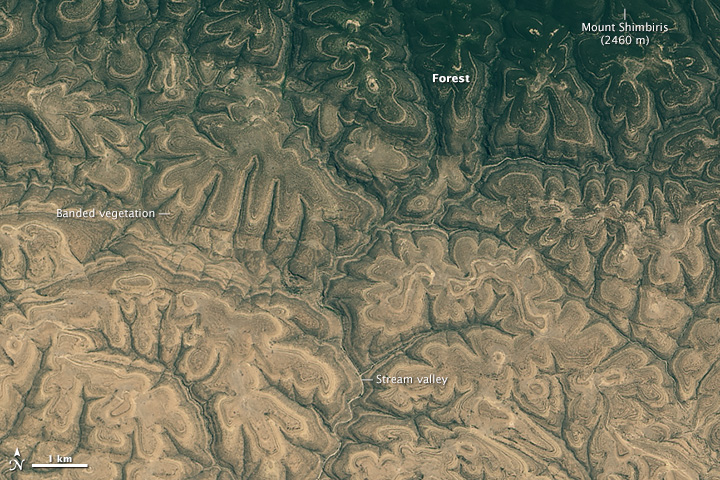 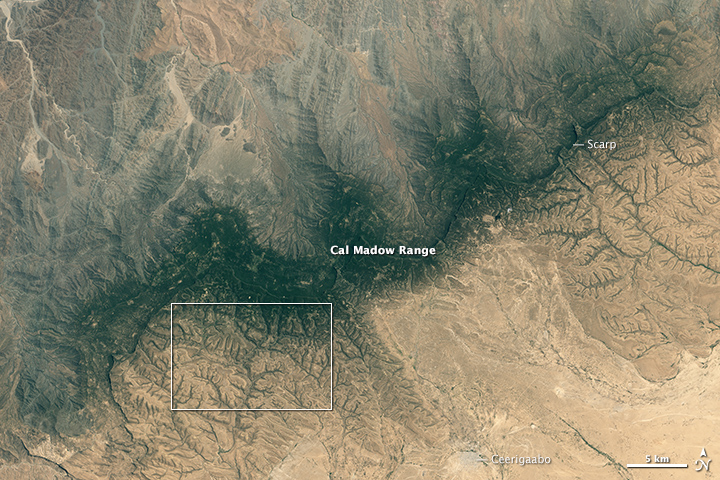 Sparsely-vegetated desert landscapes dominate most of northern Somalia. One notable exception is the Cal Madow Mountains, a narrow coastal range that runs parallel to the Gulf of Aden. Standing at least 800 meters (2,600 feet) above sea level and extending upward, the plateaus and upper slopes of the range support thriving forests. The highest point in the range, Mount Shimbiris, tops out at 2,460 meters (8,070 feet).

The Operational Land Imager (OLI) on Landsat 8 captured this image of the Cal Madow in the Sanaag province of Somaliland on June 27, 2015. The upper image shows a detailed view of forests and deeply-incised plateaus in the highlands, while the lower image offers a broader view of the range and the surrounding lowlands. The upper slopes of the range receive about 800 millimeters (30 inches) of rainfall per year. This provides enough moisture for the forests at higher elevations, but at lower elevations vegetation is concentrated in narrow stream valleys. In the second image, a long west-east running fault scarp lies just to the north of Mount Shimbiris. This scarp marks the edge of widening rift valley caused by the ongoing separation of the Arabian and Somalian plates.

In the detailed view, thin repeating strips of vegetation are visible on many of the hillsides, appearing much like the contour lines on a topographical map. These distinct bands form because of interactions between vegetation and soil that alter the permeability of the soil. While the presence of vegetation causes soil to absorb and retain more moisture, its absence makes it more difficult for soil to absorb water. As a result, runoff from rain storms tend to rush past areas with sparse vegetation until it reaches a more densely vegetated zone, amplifying the contrast between vegetated and non-vegetated areas in the process.

Of more than a thousand plant species that live in the Cal Madow, two of the most famous are Boswellia sacra (frankincense) and Commiphora myrrha (myrrh). The aromatic resin of these trees, which grow on rocky outcrops and cliffs, is highly prized for use in incense, perfume, and chewing gum. The resins are also widely used in Chinese medicine. Harvesting involves cutting the trunk of trees and returning later to collected the resin that flows out and hardens.

The city of Ceerigaabo serves as a key hub for gathering, sorting, and storing frankincense and myrrh in Somalia, which is one of the world’s leading exporters of the prized resins.

Forests in the highlands of northern Somalia are important sources of frankincense and myrhh.