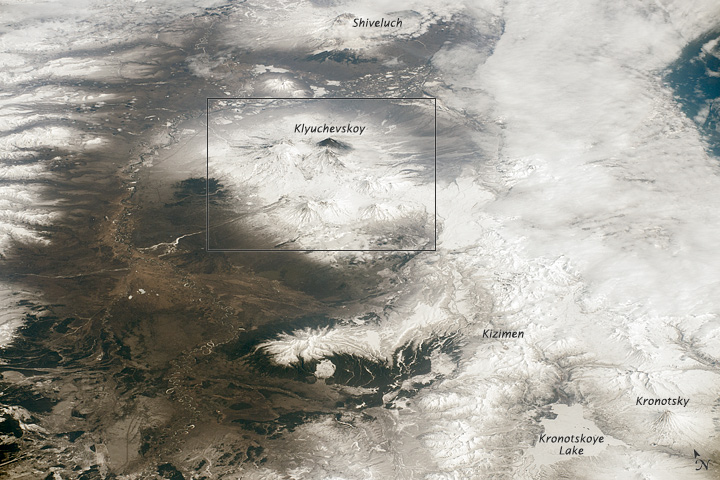 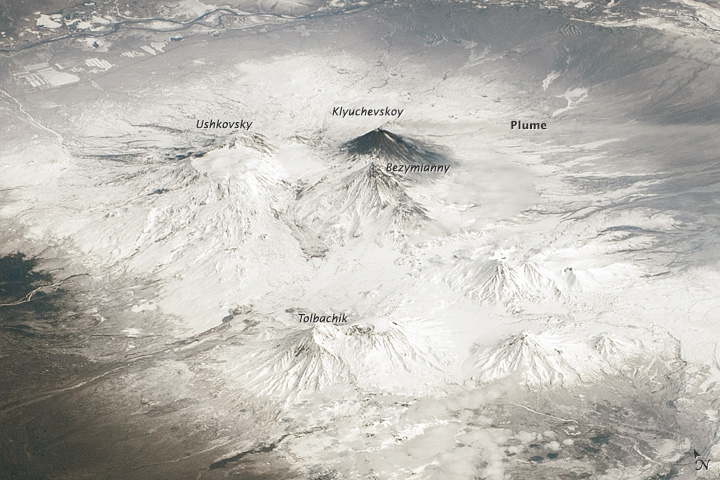 The top photograph, taken by an astronaut onboard the International Space Station, highlights one of the most active volcanic regions on Earth: the Kamchatka Peninsula in far eastern Russia. The three largest volcanoes visible at image center include Klyuchevskoy, Bezymianny, and Ushkovsky, and each is shown in close-up in the second image.

Klyuchevskoy is the most active volcano, with geologic, historical, and observational data indicating no major quiet periods since the volcano formed approximately 6,000 years ago. A thin ash and steam plume extends to the east-southeast from the summit of Klyuchevskoy, typical of activity reported at the volcano from early May 2015, when the photo was taken. The flanks of Klyuchevskoy are also covered with dark ash deposits, in contrast to the snow-covered flanks of both Bezymianny and Ushkovsky.

The Kamchatka Peninsula boasts one of the highest concentrations of volcanic features on Earth, including over 300 identified volcanoes (29 considered active), hot springs, and geysers. In addition, abundant volcanic rock exposures and volcanogenic sediments attest to the highly active tectonic setting of the peninsula, a result of subduction of the Pacific oceanic plate beneath the overriding Eurasia continental plate. In addition to the high geological interest of the region, the peninsula’s abundant wildlife and distinctive coastal and inland geography led to designation of the UNESCO Volcanoes of Kamchatka World Heritage Site in 1996.

You can view another astronaut image of Klyuchevskoy by clicking here.

Astronaut photograph ISS043-E-175007 was acquired on May 4, 2015, with a Nikon D4 digital camera using a 210 millimeter lens, and is provided by the ISS Crew Earth Observations Facility and the Earth Science and Remote Sensing Unit, Johnson Space Center. The image was taken by a member of the Expedition 43 crew. The image has been cropped and enhanced to improve contrast, and lens artifacts have been removed. The International Space Station Program supports the laboratory as part of the ISS National Lab to help astronauts take pictures of Earth that will be of the greatest value to scientists and the public, and to make those images freely available on the Internet. Additional images taken by astronauts and cosmonauts can be viewed at the NASA/JSC Gateway to Astronaut Photography of Earth. Caption by William L. Stefanov, ARES, NASA-JSC. 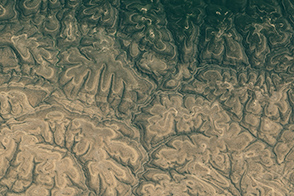 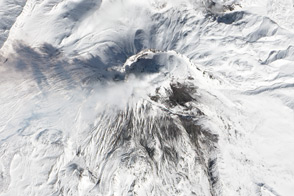 A NASA satellite captured an image of a volcanic plume rising above the Russian volcano.