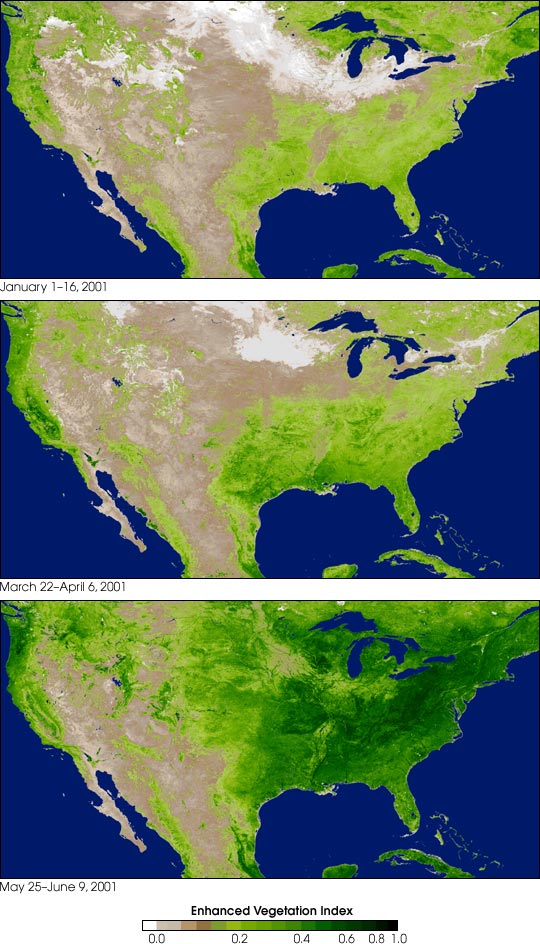 Moderate-resolution Imaging Spectroradiometer (MODIS) Enhanced Vegetation Index (EVI) observations from January - May 2001 for the United States shows the cycle of vegetation from one season to the next—from vegetation’s winter nadir, to the new growth of spring. EVI observations can help determine how human- and climate-induced changes are affecting vegetation in the U.S. and around the world. Vegetation ranges from 0, indicating no vegetation, to nearly 1, indicating densest vegetation.

The January image reveals snow in the Upper Midwest and Rocky Mountains, some of which is still present in March and entirely gone by late May. In January, the predominantly deciduous forests of the Appalachians have a lower vegetation index than the evergreen forests of the Sierra Nevada and Cascade mountain ranges, and the forests of Maine. In late spring, however, the situation is reversed. Another interesting change occurs in the Mississippi River Valley. In January, there is very little vegetation, likely the result of farmers plowing the fields and exposing bare soil. California’s Central Valley remains green year-round, a major source of winter produce.

For detailed information about the EVI data product, visit http://gaea.fcr.arizona.edu/projects/modis/.