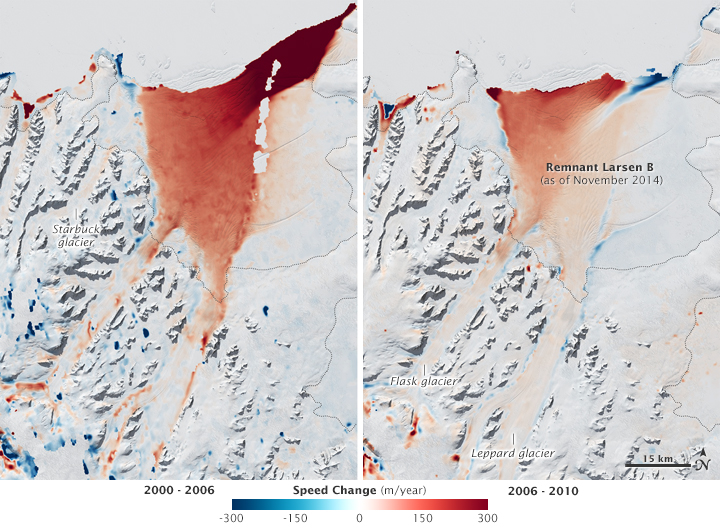 A recent NASA study found that the last remaining section of Antarctica’s Larsen B Ice Shelf, which partially collapsed in 2002, is weakening and is likely to disintegrate completely before the end of the decade.

A team led by Ala Khazendar of NASA’s Jet Propulsion Laboratory found the remnant of the Larsen B Ice Shelf is flowing faster, becoming increasingly fragmented, and developing large cracks. Two of its tributary glaciers also are flowing faster and thinning rapidly.

“These are warning signs that the remnant is disintegrating,” Khazendar said. “Although it’s fascinating scientifically to have a front-row seat to watch the ice shelf becoming unstable and breaking up, it’s bad news for our planet. This ice shelf has existed for at least 10,000 years, and soon it will be gone.”

Ice shelves are the gatekeepers for glaciers flowing from the interior of Antarctica toward the Southern Ocean. Without ice shelves, glacial ice enters the ocean faster and accelerates the pace of global sea level rise. This study, the first to look comprehensively at the health of the Larsen B remnant and the glaciers that flow into it, was published in the journal Earth and Planetary Science Letters.

Khazendar noted his estimate of the remnant’s remaining life was based on the likely scenario that a huge, widening rift near the ice shelf’s grounding line will eventually crack all the way across. The free-floating remnant will shatter into hundreds of icebergs that will drift away, and the glaciers will speed up their unhindered move to the sea.

Located on the coast of the Antarctic Peninsula, the Larsen B remnant is about 1,600 square kilometers (625 square miles) in area and as much as 500 meters (1,640 feet) thick. The remnant’s main tributary glaciers are named Leppard, Flask, and Starbuck—the latter two after characters in Moby Dick. The thickness and flow speeds of those tributaries changed only slightly in the first few years after the 2002 collapse, leading researchers to assume they remained stable. The new study revealed, however, that Leppard and Flask glaciers have thinned and accelerated considerably.

The images above show how the ice flow speeds of the glaciers and ice shelf remnant have changed during two periods of near-equal length starting soon before the 2002 disintegration. The left image represents speeds measured in 2000 subtracted from those in 2006; the right image represents speeds in 2006 subtracted from those in 2010. The background image was acquired in November 2014 with the Operational Land Imager on the Landsat 8 satellite. The dotted line traces the location of the grounding line.

According to co-author Bernd Scheuchl of the University of California–Irvine, darker red tones in the left image indicate that there was more acceleration of the ice shelf between 2000 and 2006 compared to 2006 and 2010. While still accelerating during the latter period, the rate of acceleration slowed. However, notice that the left side of the ice shelf (fed by Flask Glacier) shows a different evolution than the right side (fed by Leppard Glacier); Flask sped up earlier and maintained a more steady increase in speed.

The third and smallest glacier, Starbuck, has changed little. Starbuck’s channel is narrow compared with the other glaciers, and the small glacier is strongly anchored to the bedrock, making it comparatively stable.

“What is really surprising about Larsen B is how quickly the changes are taking place,” Khazendar said. “Change has been relentless” 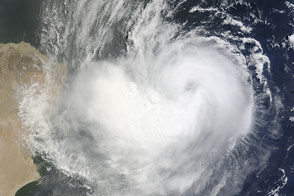