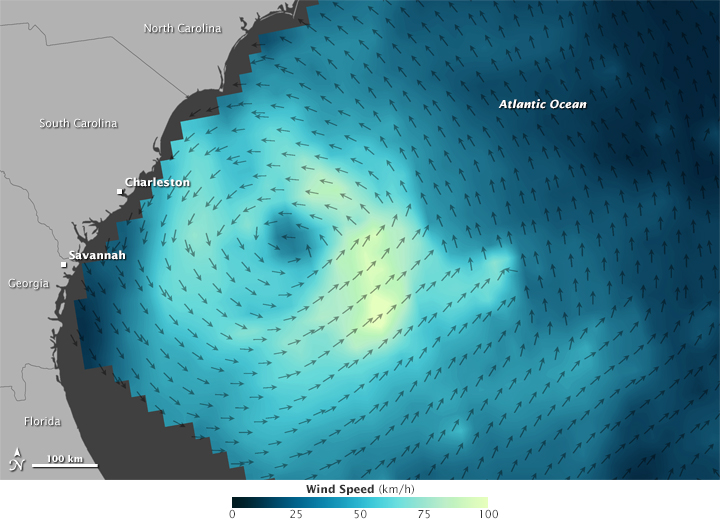 In mid-May 2015, Ana became the first named tropical storm of the North Atlantic hurricane season. May is early to see large storms in the Atlantic; the season begins in earnest on June 1. But on May 10, Tropical Storm Ana made landfall along the Carolina coast and carried maximum sustained winds of 74 kilometers per hour (46 miles per hour).

The image above was produced with data acquired by RapidScat as Ana approached the coast on the afternoon of May 8, 2015. Arrows represent the direction of near-surface winds. Shades of blue indicate the range of wind speeds (lighter blue and green represent faster-moving winds). The image below, acquired with the Moderate Resolution Imaging Spectroradiometer (MODIS) on NASA’s Terra satellite, shows a natural-color view of the same storm as it appeared on the morning of May 9. 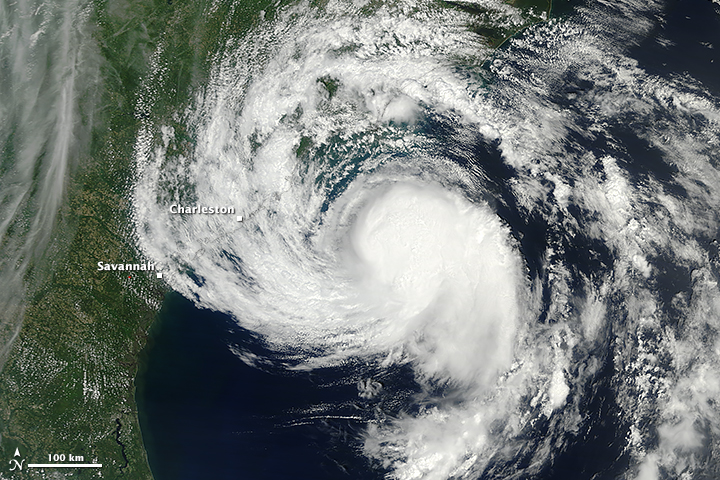 RapidScat does not measure storms’ wind speed and direction directly. Instead, microwave pulses from the instrument reflect off the ocean surface and back toward the sensor. Rough waters—those disturbed more by wind—return a stronger signal than smooth waters. From that information, scientists can derive wind speed, as well as its direction based on the position of the waves.

The nature of this measurement method means that RapidScat is describing the winds close to the ocean’s surface—useful information for weather forecasting and climate studies. Higher up in a storm, winds can be even faster. At altitudes above about 500-1,000 meters (1,600-3,300 feet), winds no longer feel the effects of friction from the surface.

An instrument on the International Space Station observed the winds of the first Atlantic tropical storm of 2015.