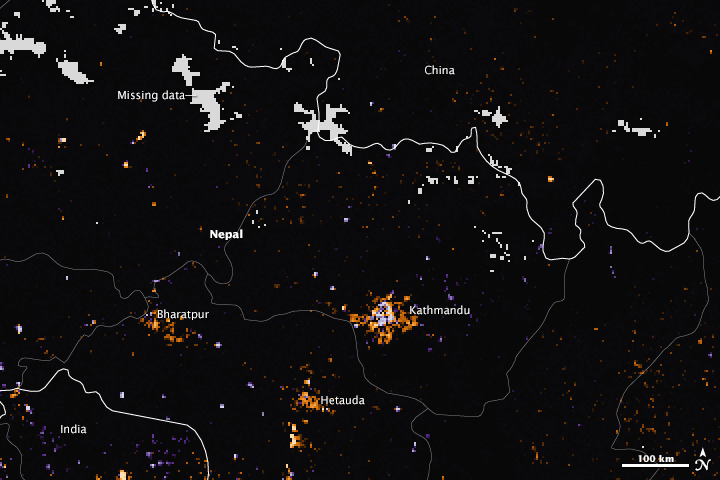 Even before a powerful 7.8 earthquake jolted the country on April 25, 2015, continuous access to electricity was not something the Nepalese could rely upon. The country’s rugged topography prevents Nepal’s main electricity provider—the state-owned Nepal Electricity Authority—from providing service to many rural areas. And even in towns and cities where service is available, chronic power shortages mean the 30 million people of Nepal often face lengthy outages.

In the aftermath of the earthquake, access to reliable electricity has diminished. As shown by the map above, both urban and rural areas face widespread outages. The map, based on data from the Visible Infrared Imaging Radiometer Suite (VIIRS) sensor on the Suomi NPP satellite, shows how the amount of light emitted by towns and cities in Nepal changed before and after the earthquake.

The satellite detected widespread power losses after the earthquake. The cities of Kathmandu, Bharatpur, and Hetauda were hit particularly hard. In rural areas, each pixel in the map appears to correspond with a different town or village. The post-earthquake image below, from the VIIRS day-night band, offers a view similar to what an astronaut might see from space. Aside from the faint lights of Katmandu, Bharatpur, and Hetauda, much of the rest of the country is a sea of black. 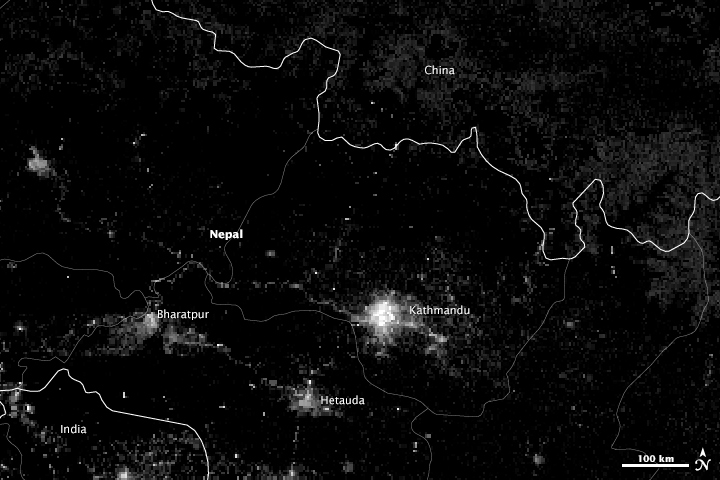 “Having information about the rural areas is particularly valuable because disaster response teams have had a great deal of trouble getting to and assessing rural areas,” noted Eleanor Stokes, a doctoral candidate at Yale University who works with VIIRS nighttime data.

While the Nepal Electricity Authority has said power would be fully restored in the Kathmandu Valley on April 29, the map offers a glimpse of the power shortages in areas beyond the valley. “What is so useful about the day-night band and what makes it different than most other types of satellite imagery is that it not only tells us about the presence or absence of infrastructure,” Stokes added, “but it actually shows us whether that infrastructure is being used.”

Some areas, particularly in central Katmandu, showed an increase in light during the post-earthquake period. Determining why is not possible with the satellite data alone. It might be explained by the rationing of power both before and after the earthquake, such that certain neighborhoods had power some nights and not others. It is also possible that the algorithm used to detect the light signal in this preliminary data, or the way the data was processed and visualized, could have introduced artifacts related to the clouds associated with the extended monsoon occurring in the region, explained Miquel Román of NASA’s Goddard Space Flight Center.

VIIRS detects light in a range of wavelengths from green to near-infrared, and it has a low-light sensor (the “day-night band”) that can distinguish night lights tens to hundreds of times better than previous satellites. In order to observe city lights and other faint light signals, Román and Stokes had to develop techniques that filter out errors created by moonlight, flashes of lightning, gas flares, clouds, and airborne particles.

“When you look at this kind of map, you have to keep in mind that it is made possible by an experimental technique,” said Román. “This is a preliminary assessment, and we are looking at a part of the world that has a very unstable power supply. This makes teasing out the signal more difficult. We will be refining the data and doing more quality control in the coming days and weeks.”

“While VIIRS data can be useful in the immediate aftermath of a natural disaster for locating severely damaged areas, the satellites daily overpasses mean it will accumulate a valuable record of how Nepal’s light output changes over time,” Román added. “We will be watching closely to see how Nepal recovers. Will power come back gradually, village by village, or will it come all at once? We’re really just at the very first stage of monitoring this tragic event.”

Darkness descended on much of Nepal after a powerful earthquake rattled the country’s already stressed electrical grid. 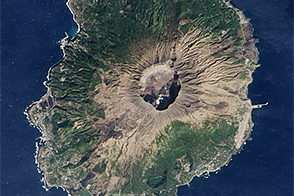