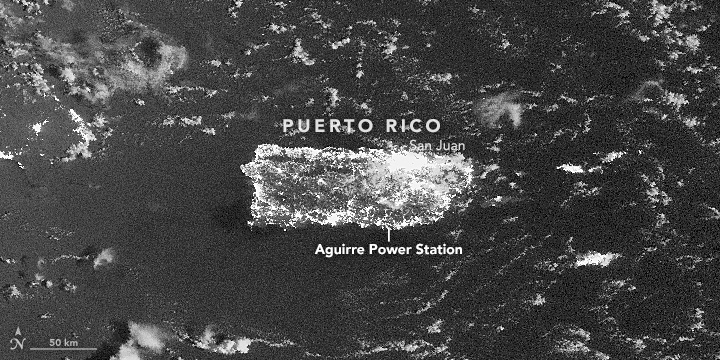 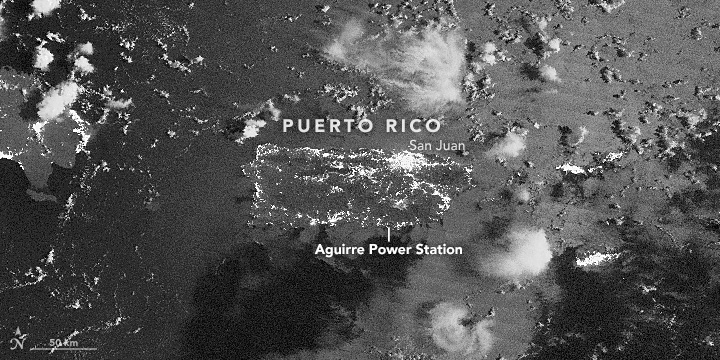 Late on September 21, 2016, a fire at a power plant substation in southern Puerto Rico triggered a cascade of problems across the island’s aging electrical grid. The event knocked out power to nearly 1.5 million customers.

Both images were captured by the VIIRS “day-night band,” which detects light in a range of wavelengths from green to near-infrared and uses filtering techniques to observe signals such as gas flares, city lights, and reflected moonlight. Note that the brightness of the ocean surface varies between the images due to slightly different angles of moonlight on the water. Use the slider tool to compare the images.

The widespread loss of electricity appears across Puerto Rico in all areas outside of the San Juan metropolitan area. Ponce, Humacao, Aguadilla, Arecibo, and Mayagüez all had large numbers of customers losing power.

The fire occurred at the Aguirre power plant in Salinas after a power switch overheated. This caused a 2,000-gallon (8,000 liter) mineral oil tank to explode and trigger a fire across a 3-acre (1 hectare) area. According to news reports, the collapse of the power system has caused widespread losses of water and air conditioning, traffic jams, and business and school closures.

“With something of this scale, we’re not just seeing an outage. We are seeing a complete stoppage in the rhythms of daily life,” said Miguel Román, a scientist at NASA Goddard Space Flight Center and member of the Suomi NPP science team.

“These nighttime satellite images help bring a level of situational awareness so we can clearly identify the extent of the impacts into key lifelines of a city’s infrastructure,” added David Green, the program manager for NASA’s Disaster Response Program. “We hope that power, civil, and health authorities can use imagery and data like this to map the extent of affected areas and prioritize their personnel and resources to restore critical infrastructure.”

NASA Earth Observatory image by Jesse Allen, using VIIRS day-night band data from the Suomi National Polar-orbiting Partnership provided by Miguel Roman (NASA/GSFC). Suomi NPP is the result of a partnership between NASA, the National Oceanic and Atmospheric Administration, and the Department of Defense. Caption by Adam Voiland. 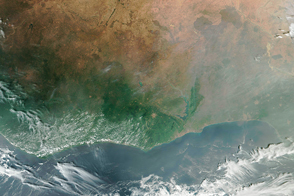