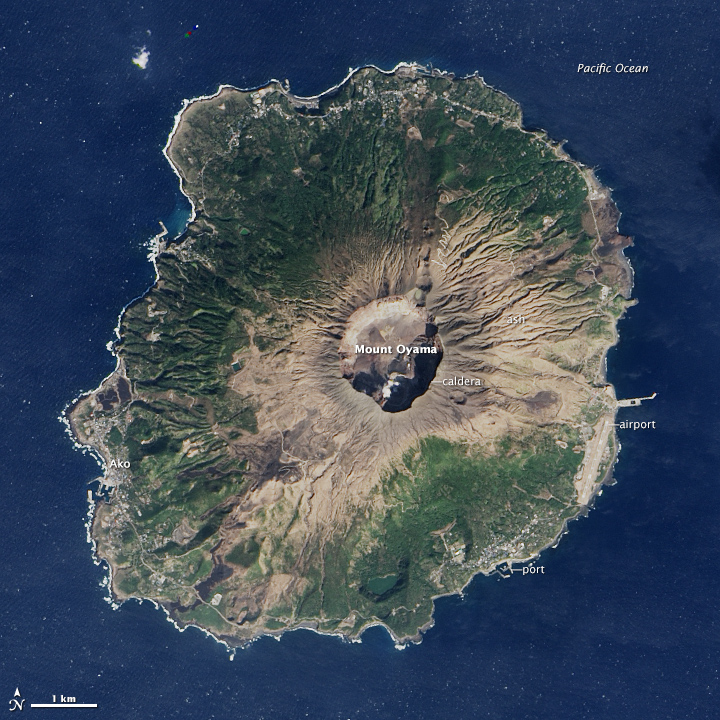 In June 2000, swarms of earthquakes and a massive volcanic eruption rocked Miyakejima, a small Japanese island about 180 kilometers (110 miles) south of Tokyo. At the height of Oyama’s activity, lava fountains gushed from the summit, hot gas and rock rushed down its slopes, layers of ash blanketed the surrounding landscape, and toxic gases leaked from the ground.

By September 2000, Japanese authorities had ordered a mandatory evacuation of all Miyakejima’s residents. Most of the 3,600 people living on the island relocated to Tokyo. But by 2005, with the intensity of Oyama’s volcanic activity diminishing, authorities began to relax the evacuation order.

Thousands of people have returned. By 2015, the island had a population of 2,775 residents. In many respects, life has returned to normal. Fishing, farming, and tourism are Miyakejima’s primary industries. Six elementary and junior high schools operate in its towns and villages.

But normal is a relative term. Since Oyama still periodically emits large amounts of sulfur dioxide, residents and tourists are supposed to carry a gas mask with them at all times. One third of the island remains off limits. A system of alarm sirens is ready to sound off should sulfur dioxide levels get too high.

The Operational Land Imager (OLI) on Landsat 8 captured this image of Miyakejima on February 11, 2015. While forests have recovered somewhat, broad barren patches of ash remain around Oyama’s caldera. The island’s towns and villages are arranged in a ring along a highway that traces Mikayejima’s coast. Several ports and an airport are visible, facilities that would be crucial if Oyama were to awaken and force another evacuation.

After an eruption in 2000 forced all of its residents to evacuate, some people have returned to this small Japanese island.