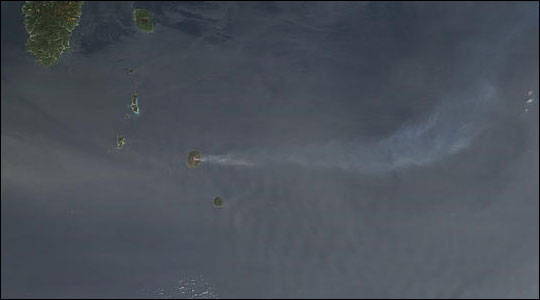 Mount Oyama, located on the Japanese island of Miyake-Jima, continues to erupt and discharge significant quantites of sulfur dioxide gas from its summit crater. Scientists estimate the volcano is emitting sulfur dioxide at a rate of between 10,000 and 20,000 tons per day.

This true-color scene was acquired during a small eruption on April 2, 2002, by the Moderate-resolution Imaging Spectroradiometer (MODIS), aboard NASA’s Terra satellite. Evacuated residents who were visiting the island said ash rose about 300 m above the volcano and fell around Miyake-Jima. The circular, 8-km-wide island of Miyake-Jima forms a low-angle stratovolcano with a 3-km-wide summit caldera. Parasitic craters and vents dot the flanks of the volcano. Frequent historical eruptions have originated at vents ranging from the summit to sea level, causing much damage. The last major eruption of Miyake-Jima occurred in August 2000, forcing the roughly 4,000 residents to evacuate the island. There were no injuries or fatalities reported then. 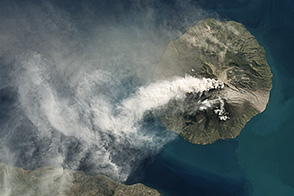 Ash from Sangeang Api spreads over Sumbawa and the Flores Sea.