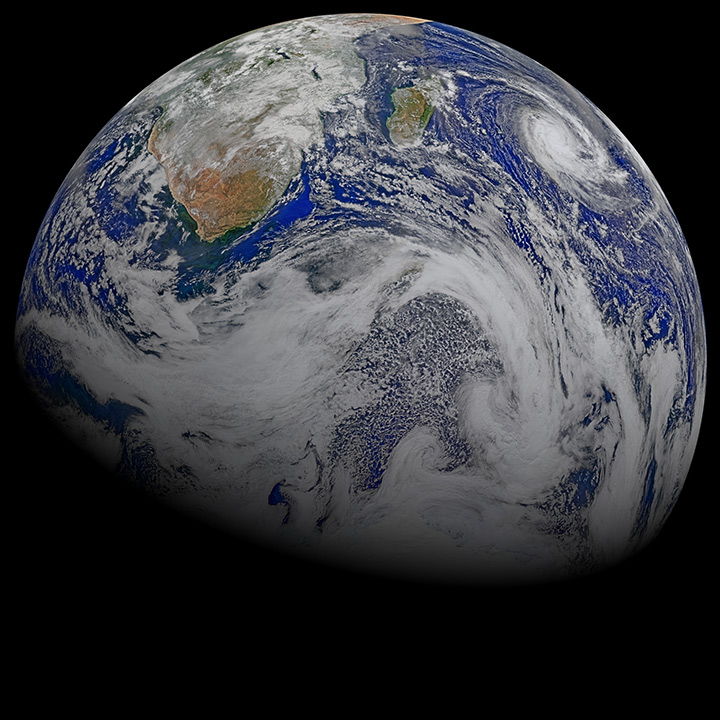 Forty-five years ago this week, Americans celebrated the first Earth Day. Sixteen years ago, on April 29, 1999, the NASA Earth Observatory was launched on the World Wide Web. Both the holiday and the web site celebrate awareness of our planet, its power, and its fragility. They also celebrate the simple beauty of the place we call home.

Today’s image captures some of that beauty. This natural-color composite image of Earth was assembled from data acquired by the Visible Infrared Imaging Radiometer Suite (VIIRS) on the Suomi National Polar-orbiting Partnership (Suomi-NPP) spacecraft. It stitches together 671, 551, and 443 nanometer wavelength data from six orbits on April 9, 2015.

Suomi NPP does not actually observe Earth from the perspective shown in this image. The satellite flies in a polar orbit at an altitude of 824 kilometers (512 miles), and its images have a resolution of 750 meters per pixel. (Click here for an example of an individual NPP image.) In the image above, the virtual camera looks down from the perspective of 8,300 kilometers (5,100 miles) above a point at 50 degrees South latitude and 40 degrees East longitude.

This composite image emphasizes the blue in our Blue Marble. Most of the scene is filled by the Indian Ocean (center and left), while parcels of the Atlantic (top left) and Southern Ocean (bottom) fill in the rest and remind us that it is all really one ocean. The image also includes southern Africa and Madagascar, with tropical cyclone Joalane swirling in the Indian Ocean.

A composite of six satellite images captures some of the planet’s southern charm.