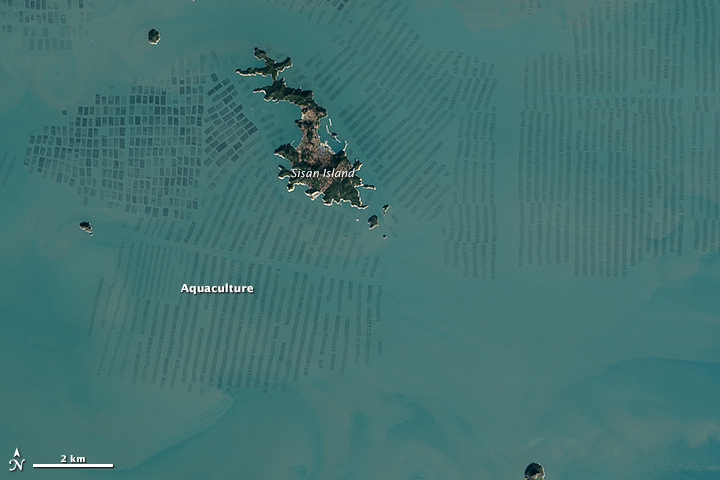 The dark squares that make up the checkerboard pattern in this image are fields of a sort—fields of seaweed. Along the south coast of South Korea, seaweed is often grown on ropes, which are held near the surface with buoys. This technique ensures that the seaweed stays close enough to the surface to get enough light during high tide but doesn’t scrape against the bottom during low tide.

The Operational Land Imager (OLI) on Landsat 8 acquired this image of seaweed cultivation in the shallow waters around Sisan Island on January 31, 2014. Home to a thriving aquaculture industry, the south coast of South Korea produces about 90 percent of the country’s seaweed crop. The waters around Sisan are not the only place where aquaculture is common. View the large image to see how ubiquitous seaweed aquaculture is along the coast in Jeollanam-do, the southernmost province on the Korean peninsula.

Two main types of seaweed are cultivated in South Korea: Undaria (known as miyeok in Korean, wakame in Japanese) and Pyropia (gim in Korean, nori in Japanese). Both types are used generously in traditional Korean, Japanese, and Chinese food.

Since 1970, farmed seaweed production has increased by approximately 8 percent per year. Today, about 90 percent of all the seaweed that humans consume globally is farmed. That may be good for the environment. In comparison to other types of food production, seaweed farming has a light environmental footprint because it does not require fresh water or fertilizer.

NASA Earth Observatory image by Jesse Allen, using Landsat data from the U.S. Geological Survey. Caption by Adam Voiland. Congratulations to reader Suzi for being the first to answer the puzzler correctly. 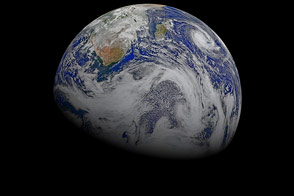