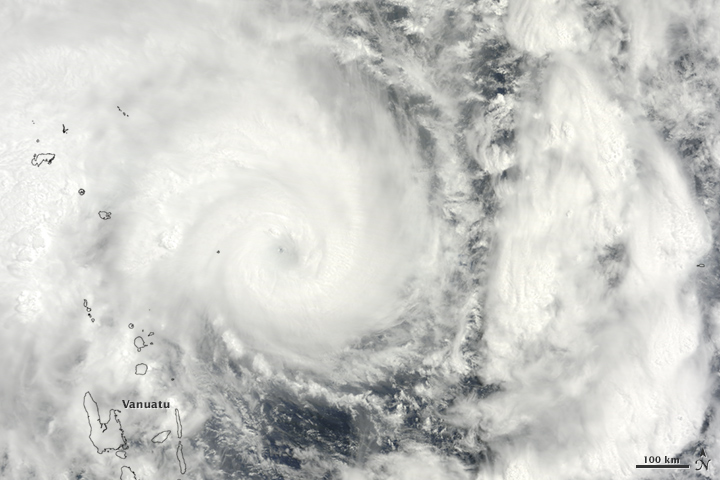 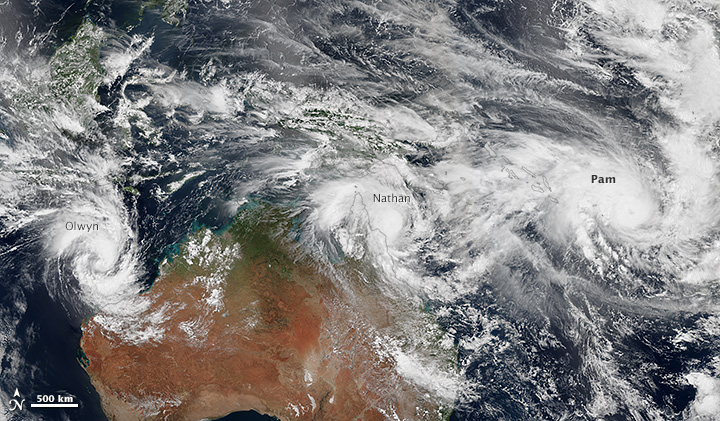 In February 2015, a pair of cyclones hit Australia within six hours of each other. A few weeks later, yet another batch of storms—three this time—churned remarkably close to Australian coasts.

The Moderate Resolution Imaging Spectroradiometer (MODIS) on NASA’s Terra satellite, captured this view of Cyclone Pam (top) on March 11, 2015, at 22:50 UTC as it neared the island chain of Vanuatu. In a mosaic (bottom image) also captured on March 11, Pam and two other storms—Nathan and Olwyn—were lined up in a row north of the continent. The mosaic is based on data collected during three orbital passes of the Visible Infrared Imaging Radiometer Suite (VIIRS) on Suomi NPP. (The MODIS on Terra acquired similar imagery later that day.)

Forecasters expect that Pam, the strongest of the three storms, will have a major effect on Vanuatu. With sustained winds of 155 miles (250 kilometers) per hour and gusts up to 190 miles (300 kilometers), Pam was already the equivalent of a Category 5 storm on March 12. As Pam moves toward Vanuata, the storm will push through an area with relatively weak upper level winds and unusually warm water, so it should continue to strengthen. According to the Joint Typhoon Warning Center, Pam’s peak intensity will likely coincide with its closest pass to the island Efate, which is home to Vanuatu’s capital city, Port Vila.

Meteorologists expect that the storm farthest west—Category 2 Olwyn—will make landfall in Western Australia along the Pilbara coast. On the other side of Australia, Nathan is forecast to approach the coast but then loop back out to sea before passing over land. Like Olwyn, most tropical cyclones affecting Australia make landfall along the northwest coastline between Broome and Exmouth. On average, about five tropical cyclones develop over the warm waters off northwestern Australia each cyclone season. About two of these hit the coast each year, one of which is severe.

NASA MODIS image by Jeff Schmaltz, LANCE/EOSDIS Rapid Response. NASA VIIRS image by Jesse Allen, using data from the Suomi National Polar-orbiting Partnership. Suomi NPP is the result of a partnership between NASA, the National Oceanic and Atmospheric Administration, and the Department of Defense. Caption by Adam Voiland.