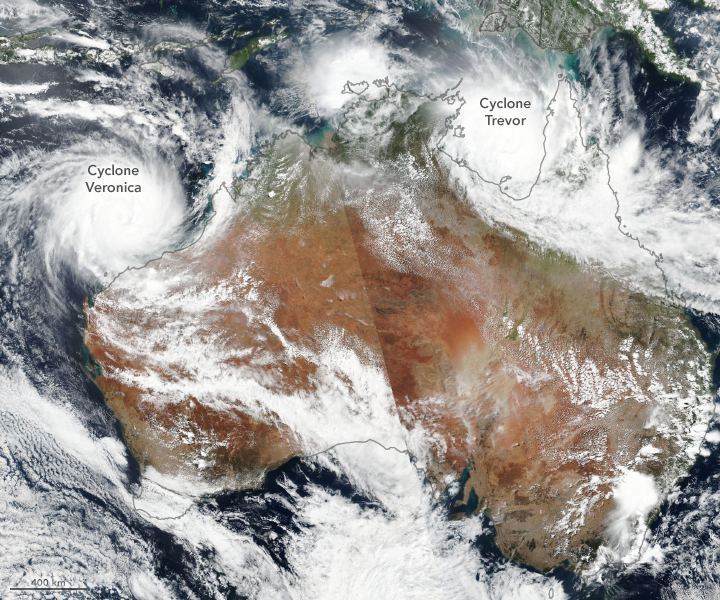 Two severe tropical cyclones bore down on northern Australia at the start of autumn 2019. Cyclone season in the region stretches from November to April, peaking in February and March.

Cyclone Trevor first made landfall on the Cape York Peninsula as a category 3 storm on March 20. The storm weakened and meandered over land before intensifying again to a category 4 storm over the warm waters of the Gulf of Carpentaria (about 31 degrees Celsius). The government of the Northern Territory declared a state of emergency and launched the largest evacuation in the state since 1974.

Trevor is predicted to make landfall again on March 23, bringing intense winds, a storm surge, and widespread rainfall of 100 to 200 millimeters (4 to 8 inches), with some areas seeing up to 300 millimeters (12 inches). Some inland desert areas could see as much rain in a few days as they receive across some entire years.

At the same time, Cyclone Veronica was approaching Western Australia and headed for possible landfall on the Pilbara Coast by March 23 or 24. Veronica developed from a tropical low pressure system to a category 4 storm on March 20. The Australian Bureau of Meteorology has advised: “Widespread very heavy rainfall conducive to major flooding is likely over the Pilbara coast and adjacent inland areas over the weekend. Heavy rainfall is expected to result in significant river rises areas of flooding and hazardous road conditions.”

On March 22, 2019, the Visible Infrared Imaging Radiometer Suite (VIIRS) on the Suomi NPP satellite acquired the data to make this composite image. The seam line across Australia marks the edge of two different early afternoon satellite passes over the continent. At the time of the image, cyclones Trevor and Veronica both had sustained winds of roughly 175 kilometers (110 miles) per hour.