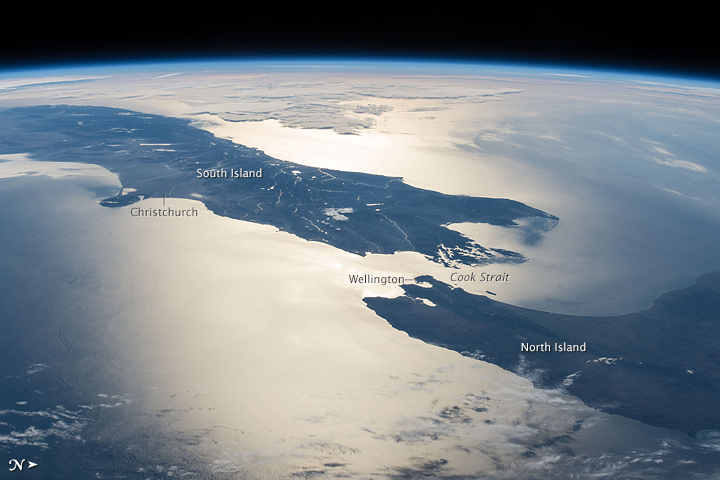 In this panorama taken from the International Space Station (ISS), the Sun’s glint point highlights the details of Cook Strait, between New Zealand’s North and South Islands. Astronauts looking west towards the setting Sun were able to see this high-contrast detail even though the center of the glint point was 1,000 kilometers (600 miles) away from the ISS. For another example of a sunglint image click here.

The sunglint shows Wellington Bay—where the capital city is located—opening onto Cook Strait. Banks Peninsula, near the city of Christchurch, is the prominent cape whose characteristic shape is well known to ISS crews.

Clouds are approaching from the top left (west) in the image. New Zealand is seldom photographed from orbit because it is one of the cloudier parts of planet, and because crew sleep periods often occur when the ISS passes over the area.

Astronaut photograph ISS042-E-178671 was acquired on January 24, 2014, with a Nikon D4 digital camera using a 70 millimeter lens, and is provided by the ISS Crew Earth Observations Facility and the Earth Science and Remote Sensing Unit, Johnson Space Center. The image was taken by a member of the Expedition 42 crew. The image has been cropped and enhanced to improve contrast, and lens artifacts have been removed. The International Space Station Program supports the laboratory as part of the ISS National Lab to help astronauts take pictures of Earth that will be of the greatest value to scientists and the public, and to make those images freely available on the Internet. Additional images taken by astronauts and cosmonauts can be viewed at the NASA/JSC Gateway to Astronaut Photography of Earth. Caption by M. Justin Wilkinson, Texas State University, Jacobs Contract, at NASA-JSC.

New Zealand is seldom photographed from orbit because it is one of the cloudier parts of planet, and because crew sleep periods often occur when the ISS passes over the area. 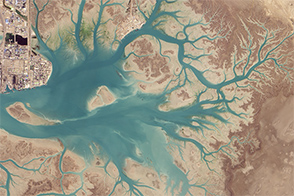