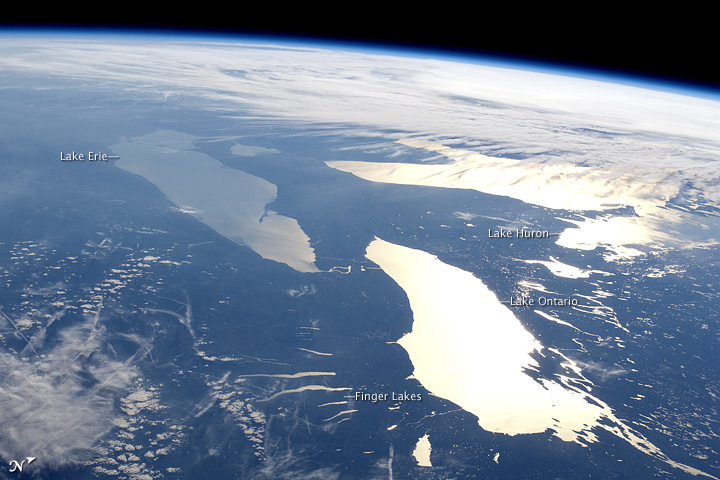 From the vantage point of the International Space Station (ISS), astronauts observe many spectacular phenomena, including aurora, noctilucent clouds, airglow, and sunglint on Earth’s water bodies. Sunglint is light reflected off of a water surface towards the observer, such that it creates the appearance of a mirror-like surface.

If the viewing and lighting conditions are ideal, that mirror-like surface can extend over very large areas, such as the entire surface of Lake Ontario (approximately 18,960 square kilometers). This astronaut photograph was taken while the ISS was located over a point to the southeast of Nova Scotia, approximately 1,200 kilometers (740 miles) ground distance from the centerpoint of the image. Lake Ontario, Lake Huron, the Finger Lakes of New York, and numerous other bodies of water appear brilliantly lit by sunglint. To the west, Lake Erie is also highlighted by sunglint, but less light is being reflected towards the astronaut observer, resulting in a duller appearance.

Much of central Canada is obscured by extensive cloud cover in the image, whereas a smaller grouping of clouds obscures the Appalachian range and Pennsylvania (image lower left). The blue envelope of the Earth’s atmosphere is visible above the curved limb, or horizon line, that extends across the upper third of the image. Such panoramic views of the planet are readily taken with handheld digital cameras through ISS viewing ports, which allow the astronaut to take advantage of the full range of viewing angles.

Astronaut photograph ISS031-E-123071 was acquired on June 14, 2012, with a Nikon D2Xs digital camera using a 45 mm lens, and is provided by the ISS Crew Earth Observations experiment and Image Science & Analysis Laboratory, Johnson Space Center. The image was taken by the Expedition 31 crew. It has been cropped and enhanced to improve contrast, and lens artifacts have been removed. The International Space Station Program supports the laboratory as part of the ISS National Lab to help astronauts take pictures of Earth that will be of the greatest value to scientists and the public, and to make those images freely available on the Internet. Additional images taken by astronauts and cosmonauts can be viewed at the NASA/JSC Gateway to Astronaut Photography of Earth. Caption by William L. Stefanov, Jacobs/ESCG at NASA-JSC