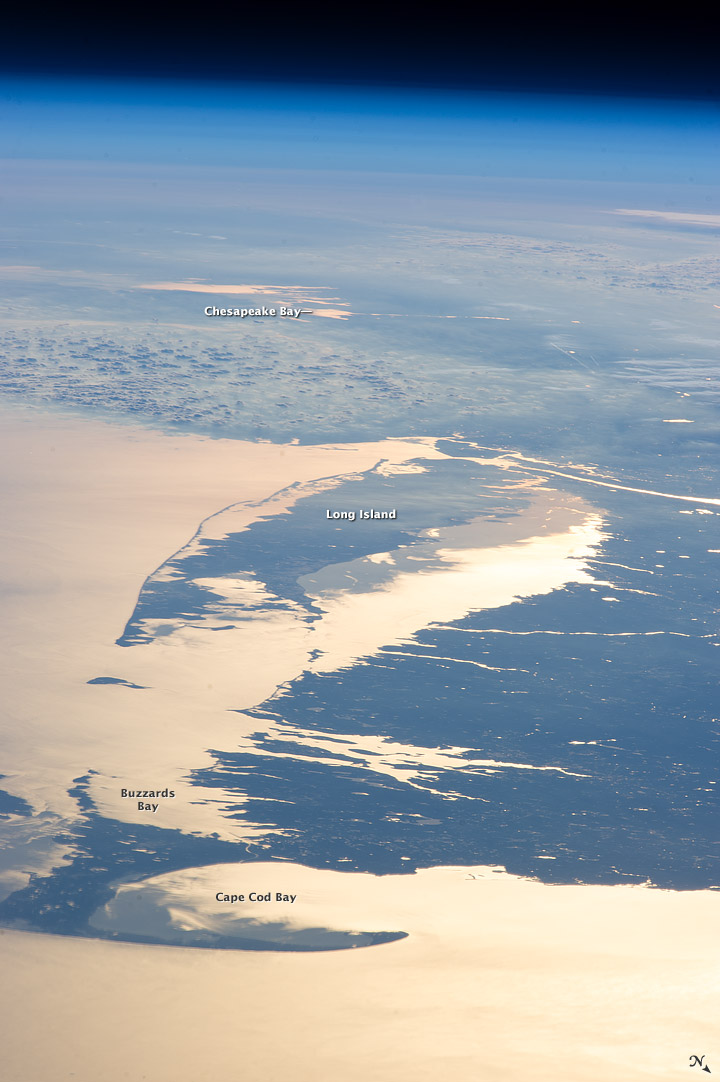 Looking out at the Earth’s surface from the International Space Station (ISS), astronauts frequently observe sunglint highlighting both ocean and inland water surfaces. The Atlantic Ocean—including Cape Cod Bay and Buzzards Bay, along the coastlines of Massachusetts and Rhode Island—has a burnished, mirror-like appearance in this image. This is due to sunlight reflected off the water surface back towards the astronaut-photographer. The peak reflection point is towards the right side of the image, lending the waters of Long Island Sound and the upper Massachusetts coastline an even brighter appearance.

Sunglint also illuminates the surface waters of Chesapeake Bay, located over 400 kilometers (250 miles) to the southwest of the tip of Long Island. This suggests that the Sun was low on the horizon due to the observed extent of the sunglint effect. The time of image acquisition, approximately 4:26 p.m. Eastern Standard Time, was about one hour before local sunset. There is little in this image to indicate that the region was still recovering from a major winter storm that dropped almost one meter (three feet) of snow over much of the northeastern USA less than a week earlier.

The high viewing angle from the ISS also allows the Earth’s curvature, or limb, to be seen; blue atmospheric layers gradually fade into the darkness of space across the top part of the image. Low clouds near Cape Cod, Long Island, and further down the Atlantic coastline cast shadows over the water surfaces, reducing the sunglint in some areas. A different perspective view of the region in sunglint is available here.

Astronaut photograph ISS034-E-48455 was acquired on February 14, 2013, with a Nikon D3S digital camera using a 400 millimeter lens, and is provided by the ISS Crew Earth Observations experiment and Image Science & Analysis Laboratory, Johnson Space Center. The image was taken by the Expedition 34 crew. It has been cropped and enhanced to improve contrast, and lens artifacts have been removed. The International Space Station Program supports the laboratory as part of the ISS National Lab to help astronauts take pictures of Earth that will be of the greatest value to scientists and the public, and to make those images freely available on the Internet. Additional images taken by astronauts and cosmonauts can be viewed at the NASA/JSC Gateway to Astronaut Photography of Earth. Caption by William L. Stefanov, Jacobs/ESCG at NASA-JSC.