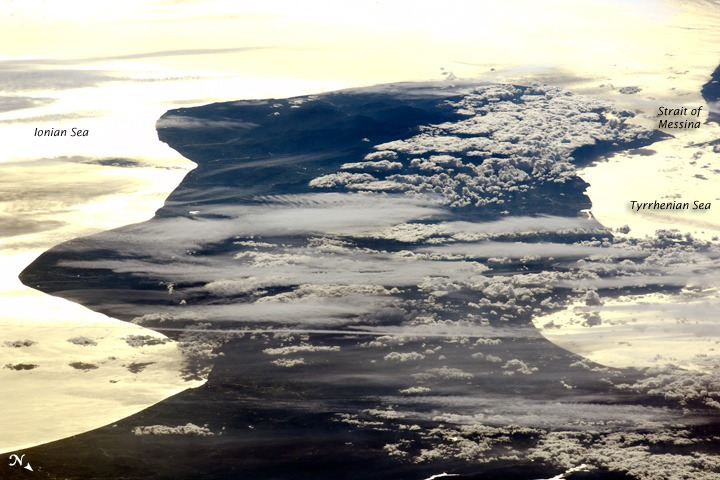 This astronaut photograph shows the Calabria region of southern Italy—the toe of Italy’s “boot”—outlined by the Ionian and Tyrrhenian Seas to the southeast and northwest respectively. The water surfaces present a mirror-like appearance due to sunglint. This phenomenon is caused by sunlight reflecting off the water surface directly back towards the astronaut observer on board the International Space Station (ISS). The ISS was located over northwestern Romania, approximately 1,040 kilometers to the northeast of Calabria, when this image was taken.

The Calabrian Peninsula appears shortened and distorted due to the extreme sideways viewing angle from the ISS. Such a perspective is termed oblique, as opposed to a nadir view, in which the astronaut is looking directly downwards towards the Earth’s surface from the ISS. This highly oblique view also highlights two distinct cloud patterns over the Calabrian interior. Patchy, highly textured cumulus clouds are present at lower altitudes, while grey altostratus clouds are stretched out by prevailing winds at higher altitudes. The Strait of Messina, just visible at image upper right, marks the boundary between the coastline of Italy and the island of Sicily.

Astronaut photograph ISS022-E-5807 was acquired on December 3, 2009, with a Nikon D2Xs digital camera fitted with a 400 mm lens, and is provided by the ISS Crew Earth Observations experiment and Image Science & Analysis Laboratory, Johnson Space Center. The image was taken by the Expedition 22 crew. The image in this article has been cropped and enhanced to improve contrast. Lens artifacts have been removed. The International Space Station Program supports the laboratory to help astronauts take pictures of Earth that will be of the greatest value to scientists and the public, and to make those images freely available on the Internet. Additional images taken by astronauts and cosmonauts can be viewed at the NASA/JSC Gateway to Astronaut Photography of Earth. Caption by William L. Stefanov, NASA-JSC.

City Lights at Night along the France-Italy Border

Moonglint and the lights of Torino, Lyon, and Marseille glitter in this nighttime astronaut photo of the Italy-France border region.