Anvil on the Horizon 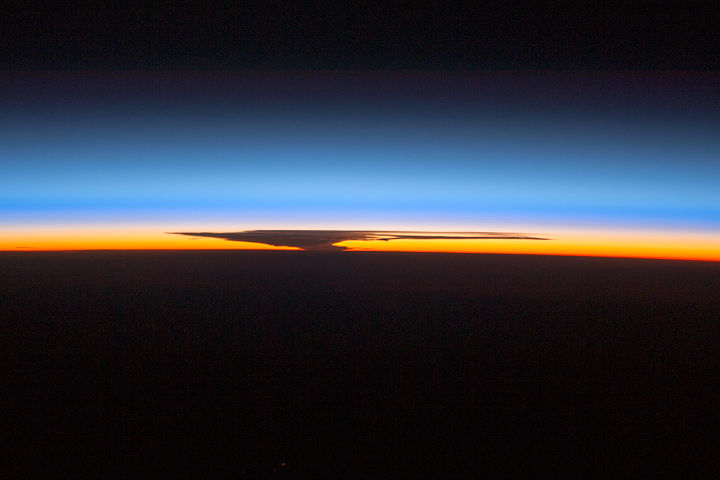 While in orbit over Papua New Guinea, astronauts aboard the International Space Station (ISS) took this photograph of a large thunderhead at sunset. The cloud was near the horizon, more than 1500 kilometers (900 miles) west of the spacecraft, likely over northern Australia or the Gulf of Carpentaria.

With enough convective energy, clouds in the lowest layer of the atmosphere—the troposphere—can rise until they bump up against the stable overlying layer. When they reach that point, they spread sideways, making a thin upper zone shaped like an anvil. Knowing the focal length of the camera lens, as well as the cloud’s position near the horizon, we can derive that the anvil pictured above measures approximately 200 kilometers across. In this view backlit by the bright atmosphere, there are no signs of rain falling from most of the cloud. Though it is hard to say for sure, it is possible the cloud was the result of a wildfire somewhere over land.

The warm colors of the troposphere (compared with the blues above) can be attributed to dust and other particulates that reflect red and yellow wavelengths. Astronauts often comment on the thinness of the Earth’s life-supporting envelope, and how it suggests the fragility of our planetary ecosystem. They also note that the number of atmospheric layers they can detect with their eyes is much greater than what their photographs show.

Astronaut photograph ISS041-E-105277 was acquired on October 30, 2014, with a Nikon D4 digital camera using a 200 millimeter lens, and is provided by the ISS Crew Earth Observations Facility and the Earth Science and Remote Sensing Unit, Johnson Space Center. The image was taken by the Expedition 41 crew. It has been cropped and enhanced to improve contrast, and lens artifacts have been removed. The International Space Station Program supports the laboratory as part of the ISS National Lab to help astronauts take pictures of Earth that will be of the greatest value to scientists and the public, and to make those images freely available on the Internet. Additional images taken by astronauts and cosmonauts can be viewed at the NASA/JSC Gateway to Astronaut Photography of Earth. Caption by M. Justin Wilkinson, Jacobs at NASA-JSC and Mark Matney, NASA-JSC.

As moisture-filled thunderhead clouds expand upward through the atmosphere, they can hit a more stable layer and flatten into an anvil shape.