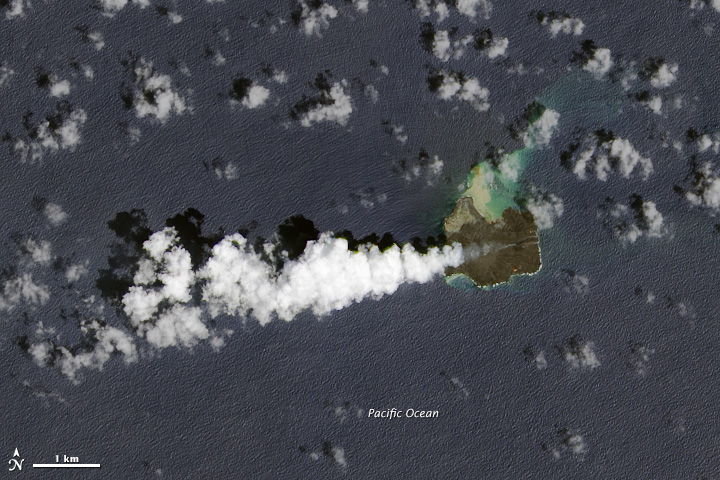 Nine months after a new island broke through the surface of the western Pacific Ocean, the volcanic eruption at Nishino-shima continues. The tiny new volcanic island (“Niijima” in Japanese) merged into Nishino-shima last winter and continued to grow. Steady flows of lava are enlarging the merged island, which is now 1.39 square kilometers (0.54 square miles).

The Operational Land Imager on Landsat 8 captured this image of Nishino-shima on August 21, 2014. Part of the Ogasawara chain, the island lies about 1,000 kilometers (600 miles) south of Tokyo at 27°14’ North, 140°52’ East. In the natural-color image, a plume of volcanic gases and steam rises from the island; such plumes can promote the formation of clouds, though most of the marine cumulus in the wider scene probably formed in the usual way. Off the northeast shore, submarine volcanic activity discolors the water with gas, minerals, and sediment.

According to observers, lava is still flowing on the east side of the island at a rate of 200,000 cubic meters per day and could eventually lead to some instability. “If lava continues to mount on the eastern area, it will be deposited on steep slopes,” wrote University of Tokyo scientist Fukashi Maeno in an email to Earth Observatory. “This could cause instability on the slope, so a partial collapse of the island may occur. We need to carefully observe the growth process.”

After flights on August 26 (photo below), Japan Coast Guard officials told local media that there is also a mound of congealed lava inside a volcanic vent on the north side of the island. The officials suggested such a mound could “seal off passages of magma and raise interior pressure if it continues to grow, resulting in a large-scale explosion.” Though no such eruption is imminent, the Coast Guard warned mariners to keep their distance from the island. 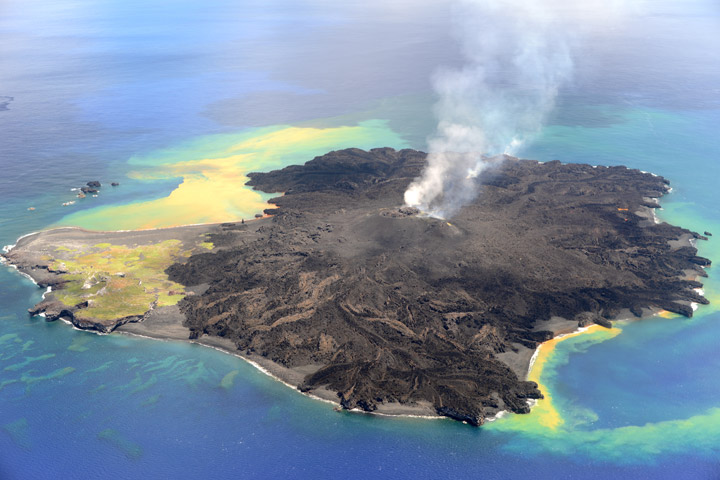 “The ideal way to monitor and avoid a natural disaster is to set up a new tsunami and earthquake detection system near the island,” Maeno told The Asahi Shimbun. “But it’s impossible for anyone to land on the island in the current situation.”

The ongoing volcanic eruption at Nishino-shima is building up the island in the western Pacific Ocean. 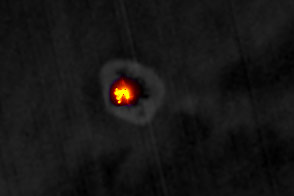 Ash and steam stream from a remote Japanese island.