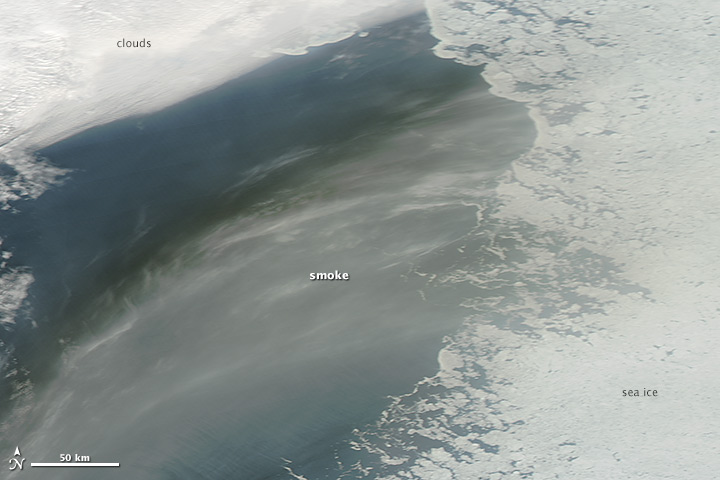 Since July, several large wildfires have raged through taiga forests in Sakha, a Russian republic in far northern Eurasia. On August 10, 2014, a particularly intense fire near Yakutsk became large and hot enough that it began to loft smoke high into the atmosphere. Fast-moving upper level winds then transported the smoke more than a thousand kilometers within a few days. A fortuitous break in the clouds gave several NASA Earth-observing satellites a striking view of the lengthy smoke stream.

On August 12, 2014, the Moderate Resolution Imaging Spectroradiometer (MODIS) on NASA’s Aqua satellite acquired this natural-color image of smoke streaming north over Siberia and then curving eastward in the Arctic. The lower image illustrates the length of the plume, which stretched from the Sea of Okhotsk to the East Siberian Sea. The top image shows the smoke moving over sea ice. In the long image, ripple-like wave clouds also appear, most likely caused by a clash between warm, dry air over Sakha and cooler, moister air arriving from the west.

Observations from the Cloud-Aerosol Lidar and Infrared Pathfinder Satellite Observation (CALIPSO) satellite suggest the smoke plume reached as high as 13 kilometers (8 miles) as it passed over Sakha. The Ozone Mapping Profiler Suite (OMPS) on Suomi NPP also detected the plume.

Satellites observed a long plume that stretched across the continent from the East Siberian Sea to the Sea of Okhotsk. 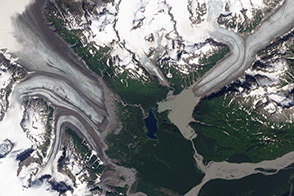