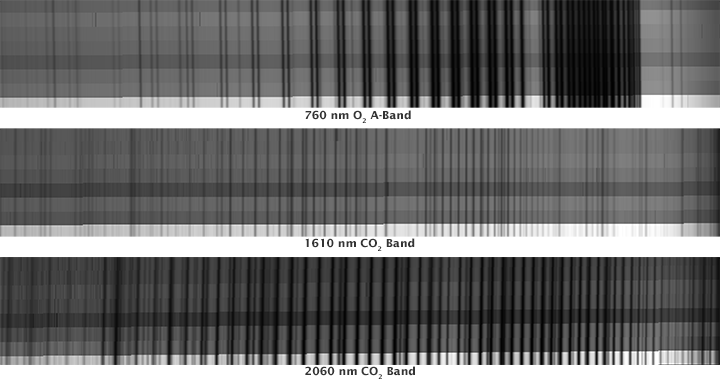 Just over a month after launch, the Orbiting Carbon Observatory-2 has been maneuvered into its final orbit and has produced its first science data.

As NASA’s first spacecraft dedicated to studying atmospheric carbon dioxide, OCO-2 will produce the most detailed picture to date of the manmade and natural sources of carbon dioxide, as well as their natural “sinks”—places on Earth’s surface where carbon dioxide is removed from the atmosphere. The satellite will study how these sources and sinks are distributed around the globe and how they change over time.

Following the July 2 launch from Vandenberg Air Force Base, OCO-2 mission controllers established two-way communications with the satellite, stabilized its attitude, and deployed its solar arrays to provide electrical power. The team then performed a systematic checkout of systems to ensure that they were functioning properly. Over the following three weeks, controllers fired thrusters to maneuver the observatory into its final 438-mile (705-kilometer), near-polar orbit. OCO-2 is now at the head of the international “Afternoon Constellation,” or “A-Train,” of Earth-observing satellites in an orbit that crosses the equator at 1:36 p.m. local time.

The image at the top of this page shows some of the first data taken by OCO-2 as it flew over Papua-New Guinea on August 6, 2014. Each plot shows three different spectra, or wavelength, observed by the satellite’s spectrometers: 760 nanometers (atmospheric oxygen), 1610 nanometers (carbon dioxide), and 2060 nanometers (carbon dioxide). As OCO-2 flies over Earth’s sunlit hemisphere, each spectrometer collects a frame three times per second (a total of about 9,000 frames from each orbit). Each frame is divided into eight spectra that record the amount of molecular oxygen or carbon dioxide over adjacent ground footprints, each of which is about 2.25 kilometers (1.39 miles) long and a few hundred meters wide. When displayed as an image, the spectra appear like bar codes. The dark lines indicate absorption by molecular oxygen or carbon dioxide.

“The initial data from OCO-2 appear exactly as expected; the spectra lines are well resolved, sharp, and deep,” said OCO-2 chief architect and calibration lead Randy Pollock of NASA’s Jet Propulsion Laboratory. “We still have a lot of work to do to go from having a working instrument to having a well-calibrated and scientifically useful instrument, but this was an amazingly important milestone.” 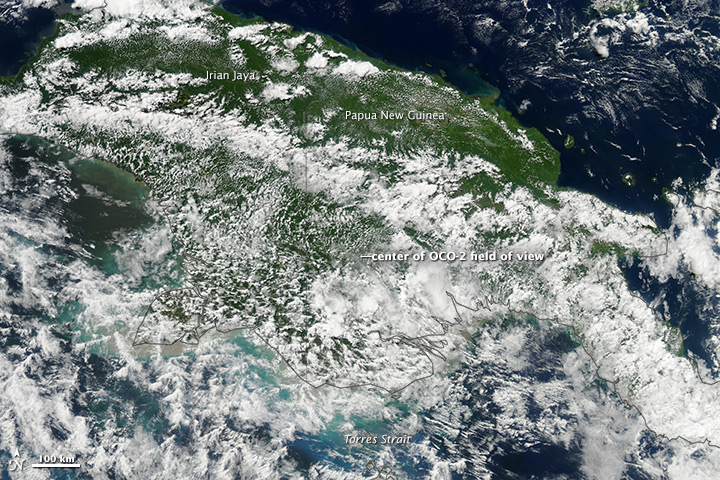 To put the spectra in context, this natural-color image shows the cloudy, forested scene below OCO-2 just minutes after it collected its data. The color image was acquired by the Moderate Resolution Imaging Spectroradiometer (MODIS) on NASA’s Aqua satellite, which flies in the same A Train orbit.

The A-Train is a multi-satellite, formation-flying “super observatory” that records the health of Earth’s atmosphere and surface environment. Starting with the launch of Aqua in 2002, this group of satellites has been collecting an unprecedented quantity of simultaneous climate and weather measurements. OCO-2 is now followed in orbit by the Japanese GCOM-W1 satellite and NASA’s Aqua, CALIPSO, CloudSat, and Aura spacecraft.

The Orbiting Carbon Observatory-2 will help scientists quantify the levels of carbon dioxide in the atmosphere. 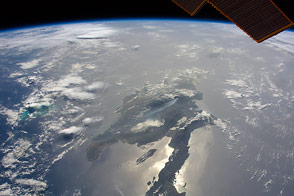