Panorama of Hispaniola and the Caribbean 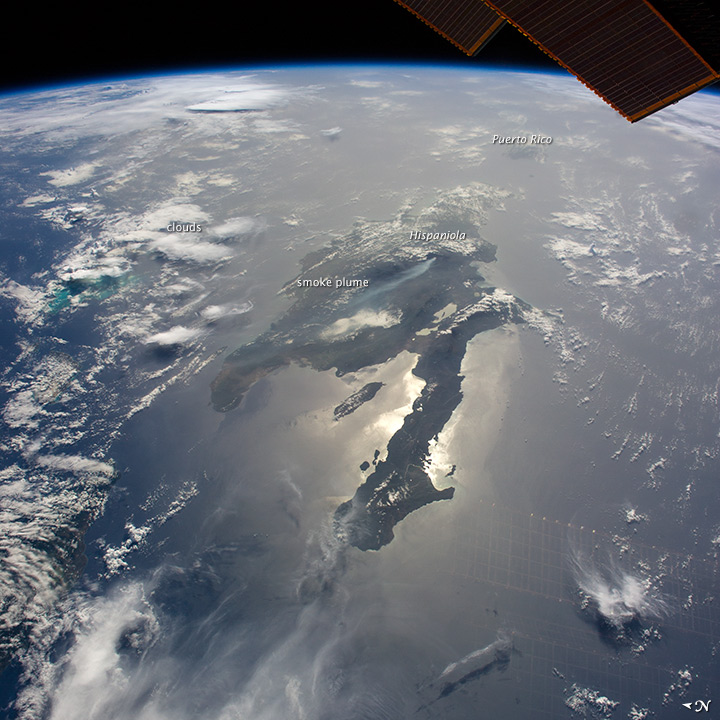 Looking east into a rising sun, the crew onboard the International Space Station (ISS) took this panoramic photo of the island of Hispaniola, with sunglint illuminating the long western peninsula of Haiti. Several thunderheads throw shadows towards the camera at image left. The photo looks a little hazy, likely because of dust in the atmosphere. Dust blows across the Atlantic Ocean from Africa, reaching the western hemisphere every month of the year.

The plume from a very large wildfire stretches westward across the image. The Constanza Fire started in a national forest on the Dominican Republic and grew to an extent that it threatened surrounding towns and prompted an International Disaster Charter (IDC) activation. Through the charter, a request for imagery was sent to the ISS crew in the hopes that photos might be able to assist firefighters on the ground. Hurricane Bertha tracked over the island a week later and helped douse the flames.

Despite the austere tone of the image, there are touches of color in the blue waters of the Turks and Caicos Islands—which extending from under a large thundercloud (image left)—and in the edge of an ISS solar panel (top right). The solar panels also make a faint reflection on the ISS window (lower right).

Astronaut photograph ISS040-E-80921 was acquired on July 26, 2014, with a Nikon D3S digital camera using a 28 millimeter lens, and is provided by the ISS Crew Earth Observations Facility and the Earth Science and Remote Sensing Unit, Johnson Space Center. The image was taken by the Expedition 40 crew. It has been cropped and enhanced to improve contrast, and lens artifacts have been removed. The International Space Station Program supports the laboratory as part of the ISS National Lab to help astronauts take pictures of Earth that will be of the greatest value to scientists and the public, and to make those images freely available on the Internet. Additional images taken by astronauts and cosmonauts can be viewed at the NASA/JSC Gateway to Astronaut Photography of Earth. Caption by M. Justin Wilkinson, Jacobs at NASA-JSC.

Astronauts captured an oblique view of the island that includes Haiti and the Dominican Republic as a wildfire raged in a national forest.

A Dusty Day Over Western Africa

A satellite image and space station video show a dust plume stretching over the Atlantic Ocean.

Airborne African dust regularly reaches northeastern South America and the Caribbean. Westward dust transport from the Sahara across the central Atlantic has been a common occurrence this spring, with major events visible in both satellite images and photographs. Cap Vert, the westernmost point of Senegal, is dimly visible beneath the dust mass (center); the Arquipélago dos Bijagós in Guinea Bissau lies opposite the mouth of the sediment-laden Rio Corubal.