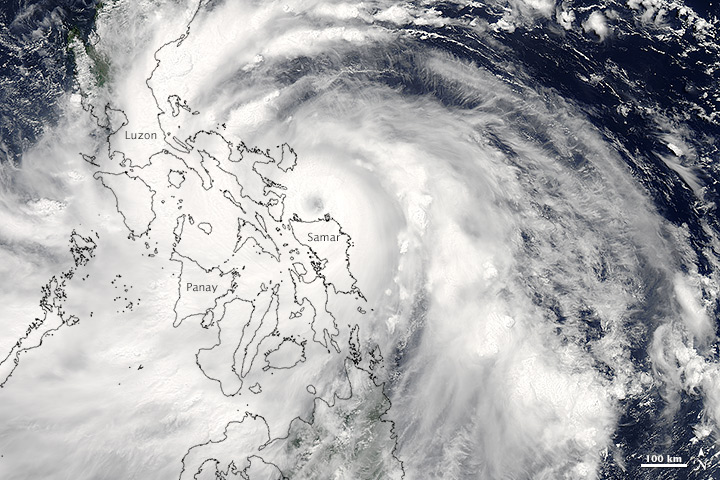 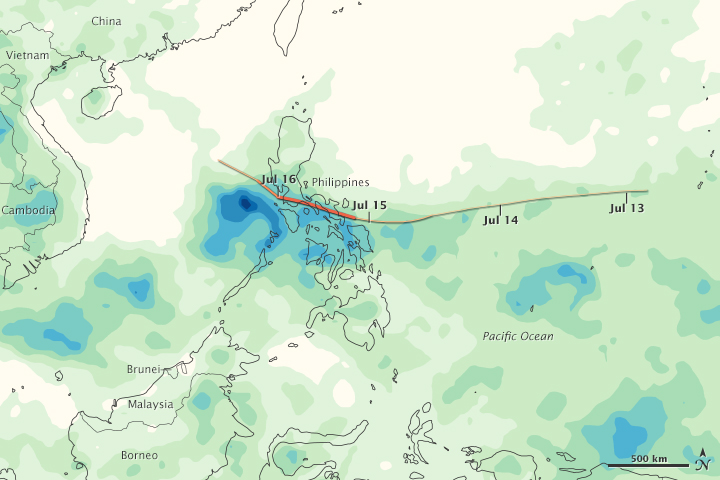 Eight months after Super Typhoon Haiyan made landfall, another powerful storm battered the Philippines. On July 15, 2014, Rammasun (known locally as Glenda) swept over southern Luzon as a category 3 storm, bringing torrential rain and sustained winds of 200 kilometers (125 miles) per hour.

The Moderate Resolution Imaging Spectroradiometer (MODIS) on NASA’s Aqua satellite acquired this image of Rammasun at 1:00 p.m. local time (0500 UTC) on July 15, just before it made landfall. By the time the storm had passed over the Philippines on July 16, it had dropped more than 200 millimeters (8 inches) of rain on parts of Luzon, Samar, and Panay, according to the Multi-satellite Precipitation Analysis, which is based largely on data collected by the Tropical Rainfall Measuring Mission (TRMM). In the map above, heavier rainfall is shown in dark blue.

Rammasun was mild in comparison to Haiyan, a record-breaking typhoon that left more than 7,300 people dead or missing. So far, officials have blamed 20 deaths on Rammasun, mainly due to falling trees and power lines. However, the toll could have been much worse. Rammasun passed within 60 kilometers (40 miles) of Manila, a capital city of 12 million people, but the storm’s eyewall collapsed as it neared the city, limiting winds to about 32 kilometers (20 miles) per hour at the Manila airport. Nevertheless, Rammasun is still among the most powerful typhoons on record to pass so close to Manila. With the memory of Haiyan still fresh, the approach of Rammasun prompted more than 400,000 people to evacuate their homes.

The typhoon was weakened by its interactions with the rugged terrain of the Philippines, but forecasters expect it to reorganize and intensify as it moves over warm waters and encounters favorable wind conditions in the South China Sea. On July 16, Rammasun was moving northwest as a category 1 typhoon. Forecasters expected it to make landfall on China’s Hainan Island as a category 2 or 3 storm on Friday.