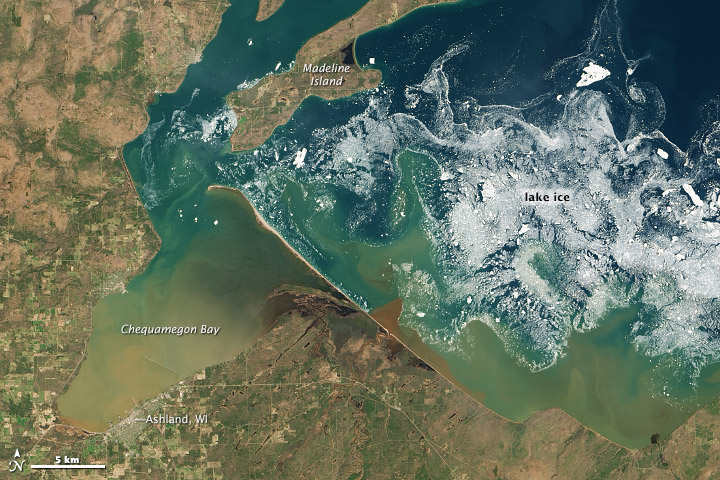 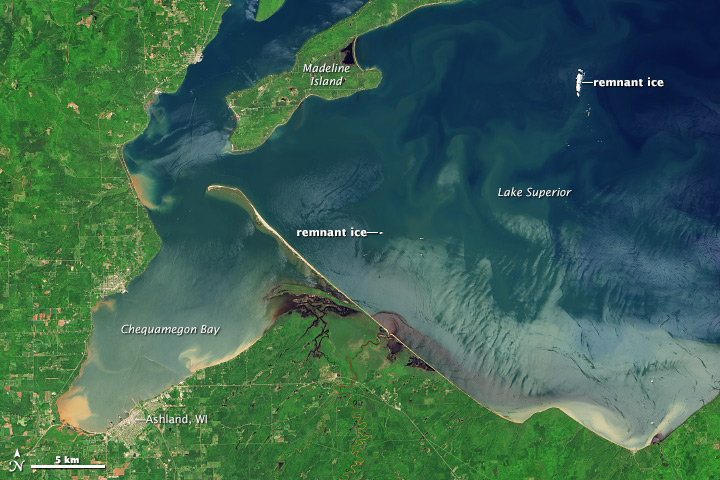 Air temperatures in the states and provinces around the Great Lakes suggest that meteorological summer has arrived. But the icy grip of winter is lingering in cool water temperatures and drifting chunks of ice. For nearly seven months, ice has been afloat somewhere on the Great Lakes, an ice season longer than anything in the satellite records and in anyone’s memory. In an average year, the lakes are ice free by late April or early May.

As recently as May 20, 2014, Lake Superior was still nearly 7 percent ice covered; on June 3, it was 1.3 percent. The ice was concentrated mostly in the far western and southern parts of the lake—even as air temperatures onshore approached 80 degrees Fahrenheit (27 degrees Celsius) on some days. In the second week of June, boaters, fishermen, and scientists were still capturing photos of ice chunks in the water, though the Great Lakes Environmental Research Laboratory officially declared the region to be effectively ice free for the sake of shipping interests.

The Operational Land Imager (OLI) on the Landsat 8 satellite captured the top image on May 23, 2014, the start of Memorial Day weekend (and unofficial start of summer in the United States). The second image was acquired on June 8, 2014. Both show Lake Superior near Chequamegon Bay, Wisconsin, about 100 kilometers (60 miles) east of Duluth, Minnesota. The bay lies near the western end of Lake Superior, which is bounded by the American states of Wisconsin, Michigan, and Minnesota and by Canada’s Ontario Province. Turn on the image comparison tool to see the changes in ice cover and river sediment outflow over two weeks.

The residual ice in June is not necessarily a surprise given the record-setting cold weather and extensive ice cover this winter. The Weather Channel reported that temperatures in nearby Marquette, Wisconsin, stayed below freezing for a record 75 days in the midst of winter. Lake Superior was still 64 percent ice-covered in mid-April 2014. And water temperatures in Lake Superior were still in the 30s (0 to 5 Celsius) as of June 10, 2014.

Nonetheless, the icy waters made for some interesting summer fishing and sunbathing scenes, as shown in this MLive.com slideshow and on Twitter.