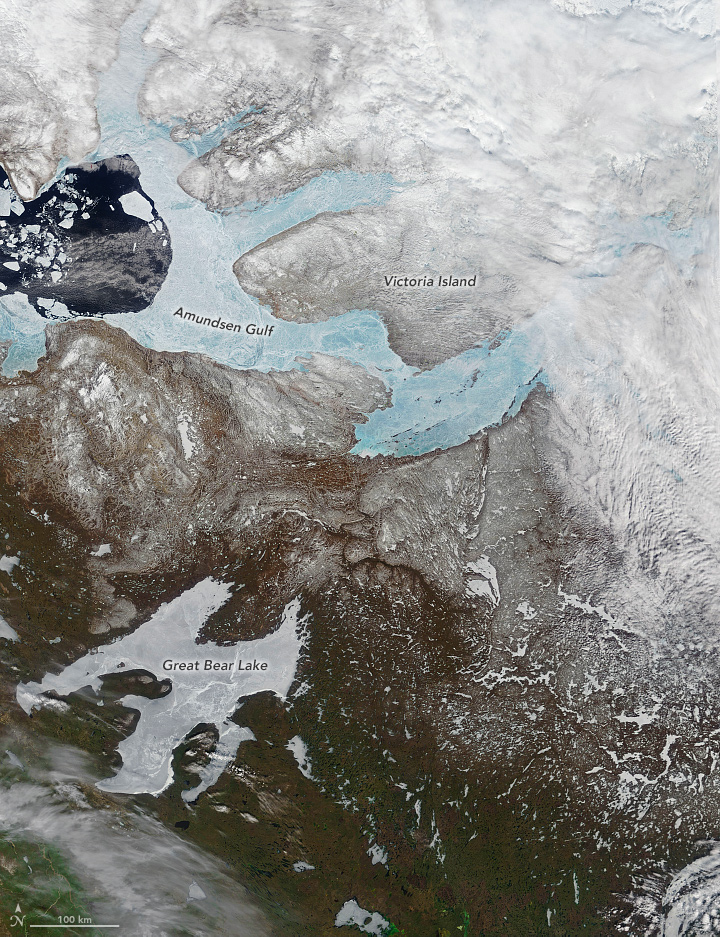 Icy lakes and rivers make a significant footprint on the Arctic landscape. Though widely dispersed, lakes cover as much as 40 to 50 percent of the land in many parts of the Arctic, and seasonal lake and river ice covers roughly 2 percent of all of Earth’s land surfaces. Since lakes and rivers have the highest evaporation rate of any surface in high latitudes, understanding and monitoring seasonal ice cover is critical to accurately forecasting the weather and understanding regional climate processes.

Lake and river ice also affects the people who live in the Arctic. Seasonal ice roads serve as a key transportation route for many communities. Ice jams can produce sudden and dangerous hazards to hydroelectric power facilities, infrastructure, and human settlements. Changing ice conditions make shipping and boating a challenge. And ice is involved in a range of hydrological processes that can affect the quality of drinking water.

Nonetheless, lake and river ice generally gets the least attention from ice scientists. According to one analysis, scientists publish roughly 50 scientific articles related to lake or river ice each year. In comparison, well over 600 articles get written about glaciers, 500 about snow, 350 about sea ice, and 250 about permafrost.

On May 29, 2017, the Moderate Resolution Imaging Spectroradiometer (MODIS) on NASA’s Terra satellite captured this image of ice covering the Amundsen Gulf, Great Bear Lake, and numerous small lakes in the northern reaches of Canada’s Northwest Territories and Nunavut. Sea ice generally forms in the Gulf of Amundsen in December or January and breaks up in June or July. Lake and river ice in this area follow roughly the same pattern, though shallow lakes freeze up earlier in the fall and melt earlier in the spring than larger, deeper lakes.