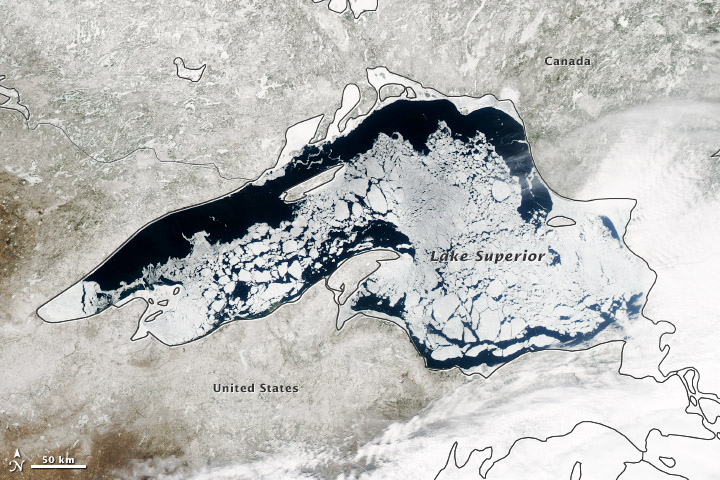 Though North America is a full month into astronomical spring, the Great Lakes have been slow to give up on winter. As of April 22, 2014, the Great Lakes were 33.9 percent ice covered. The lake they call Superior dominated the pack.

In the early afternoon on April 20, 2014, the Moderate Resolution Imaging Spectroradiometer (MODIS) on NASA’s Aqua satellite captured this natural-color image of Lake Superior, which straddles the United States–Canada border. At the time Aqua passed over, the lake was 63.5 percent ice covered, according to the NOAA Great Lakes Environmental Research Lab (GLERL). Averaged across Lake Superior, ice was 22.6 centimeters (8.9 inches) thick; it was as much as twice that thickness in some locations.

GLERL researcher George Leshkevich affirmed that ice cover this spring is significantly above normal. For comparison, Lake Superior had 3.6 percent ice cover on April 20, 2013; in 2012, ice was completely gone by April 12. In the last winter that ice cover grew so thick on Lake Superior (2009), it reached 93.7 percent on March 2 but was down to 6.7 percent by April 21.

Average water temperatures on all of the Great Lakes have been rising over the past 30 to 40 years and ice cover has generally been shrinking. (Lake Superior ice was down about 79 percent since the 1970s.) But chilled by persistent polar air masses throughout the 2013-14 winter, ice cover reached 88.4 percent on February 13 and 92.2 percent on March 6, 2014, the second highest level in four decades of record-keeping.

Air temperatures in the Great Lakes region were well below normal for March, and the cool pattern is being reinforced along the coasts because the water is absorbing less sunlight and warming less than in typical spring conditions. The graph below, based on data from Environment Canada, shows the 2014 conditions for all of the Great Lakes in mid-April compared to the past 33 years.

Lake Superior ice cover got as high as 95.3 percent on March 19. By April 22, it was reported at 59.9 percent; Lake Huron was nearly 30.4 percent. News outlets noted that as many as 70 ships have been backed up in Lakes Michigan, Huron, and Erie, waiting for passage into ports on Lake Superior. The U.S. Coast Guard has been grouping ships together into small convoys after they pass through locks at Sault Ste. Marie, in order to maximize ice-breaking efficiency and to protect ships from damage.

Superior is the world’s largest freshwater lake by area (82,100 square kilometers or 31,700 square miles) and the third largest by volume. The waters average 147 meters (483 feet) in depth, and the basin is believed to hold about 10 percent of the world’s liquid fresh water.