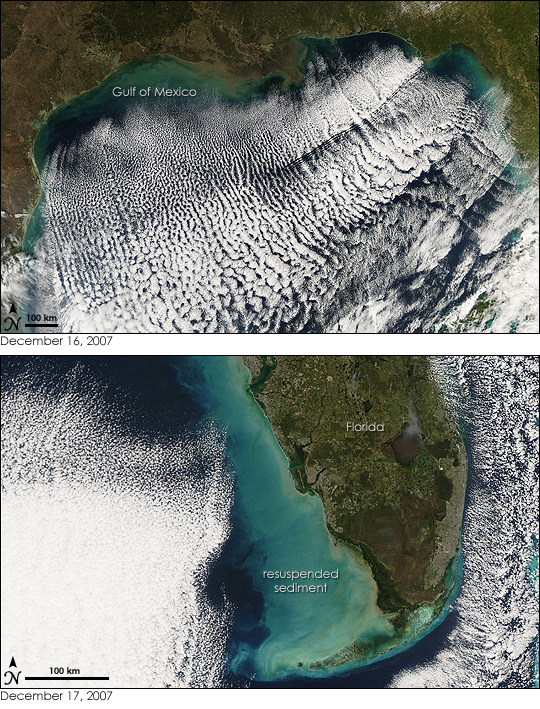 Strong winds gusted over the Gulf of Mexico on December 16, 2007, and though the wind is invisible in these photo-like snapshots, its presence is written in the clouds and on the surface of the water. The top image, captured by the Moderate Resolution Imaging Spectroradiometer (MODIS) on NASA’s Aqua satellite on the afternoon of December 16, shows long rows of clouds called cloud streets that are combed into a sweeping curve by the northwest wind. The clouds formed when cold, dry air blowing out of the northwest encountered warm, moist air over the gulf. The fast-moving cold air chilled the moist air until the water vapor condensed into clouds that followed the wind’s path.

In addition to the long vertical lines that align with the wind direction, clusters of waves cut across the clouds parallel to the shore. These lines are the waves created when the cold, dry air collided with and rose over the mass of warm, moist air. Like the waves that rise and fall through water after it hits a retaining wall, these waves ripple across the front of the cold air mass where it clashes with the stable, warm air. The dark horizontal lines are cloud-free areas where the oscillating cold air dips into the warmer air beneath it. The air is too warm in the trough of the waves for clouds to form.

The lower image shows how the wind impacted the ocean. By the time Aqua MODIS flew over the Gulf of Mexico on the afternoon of the following day (December 17), the winds and the clouds had shifted, revealing clouds of sediment in the shallow waters off the west coast of Florida. The winds had churned the water, which brought sediment from the ocean floor to the surface, coloring the water tan and pale blue-green. On land, red dots and faint plumes of smoke point to fires burning in Florida. The heavily populated southeast coast of Florida, which includes the Miami metro region, is cement gray.

The large images provided above are at MODIS’ maximum resolution of 250 meters per pixel. Both the December 16 and December 17 images are available from the MODIS Rapid Response System in additional resolutions, including an easier-to-download 500-meter-per-pixel image.

Wave Clouds over the Arabian Sea

Like a massive, ethereal bird gliding into the Persian Gulf, a large cluster of wave clouds spans the Arabian Sea from Oman to India. This cloud formation is likely an undular bore, which is created in the interaction between the cool, dry air in a low-pressure system with a stable layer of warm, moist air.