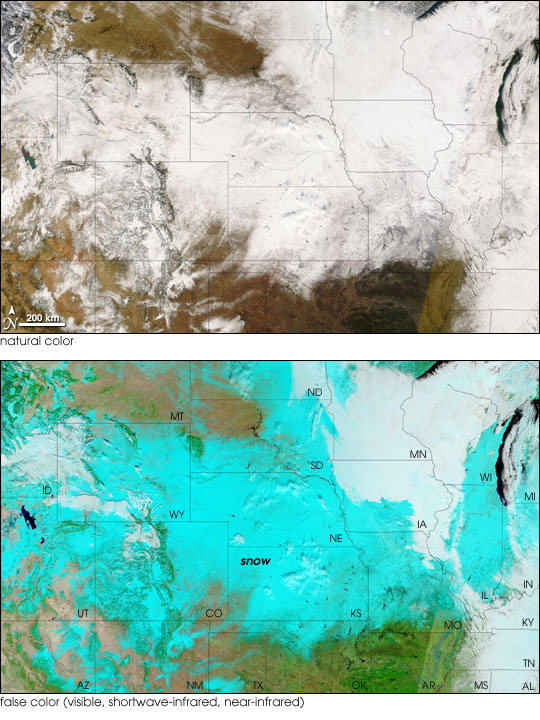 A major snow storm slid across the United States over the weekend of December 15, 2007, laying down ice and snow across the country from the Rockies to the Great Lakes. More than a foot of snow fell in some places, canceling air travel and causing some states to forbid all but emergency vehicles from being on the roads. This was the second major storm to wallop the country’s mid-section in December; the first arrived at the start of the month.

As the storm moved toward the Mid-Atlantic and Northeast, the skies cleared over the Midwest on December 16, allowing the Moderate Resolution Imaging Spectroradiometer (MODIS) on NASA’s Terra satellite to capture these images of a wide swath of snow spanning the country’s mid-section. The top image is a photo-like view of the scene, while the bottom image uses visible, shortwave-infrared, and near-infrared light to make snow on the ground (bright blue) stand out from clouds (white) and vegetation (green). Lakes appear deep blue in this type of image.

The snow highlights the topography of the Rocky Mountains, which run north-south through the images in a series of sub-ranges from Idaho and Montana to New Mexico. The evergreen forests on their slopes appear dark brown in the top image, but green in the false-color version of the scene. Near the center of the image, the dark blue ribbon of the Missouri River cuts through South Dakota, the river widening in places in a series of reservoirs. Near the lower right of the false-color image, standing water (or water-saturated ground) in the Mississippi River alluvial plain appears light blue.

The large images provided above have a spatial resolution (level of detail) of 1 kilometer per pixel. The MODIS Rapid Response Team provides twice-daily images of sub-sections of the United States in additional resolutions and formats via a clickable map.

A major snow storm slid across the United States over the weekend of December 15, 2007, laying down ice and snow across the country from the Rockies to the Great Lakes. This was the second major storm to wallop the country’s mid-section in December.