Seasonal Amazon Greening May Be a Satellite Effect 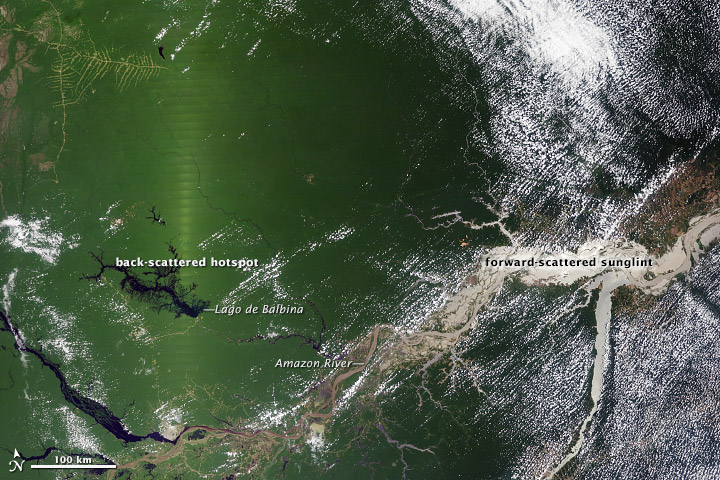 Over the past decade, remote sensing scientists and ecologists have debated an unusual, counter-intuitive satellite observation: At times, the Amazon rainforest has appeared to grow greener in dry seasons and droughts when one would expect trees to show signs of stress. Researchers have built computer models, analyzed and processed satellite images, and conducted field studies in those forests. They have postulated and speculated, trying to understand why a system so dependent on rainfall would appear healthier when water is scarcer.

A new analysis by Doug Morton and colleagues at NASA’s Goddard Space Flight Center has added a new twist to the Amazon greening debate. Much of the greening, Morton suggests, may be an artifact of how satellite instruments image the Amazon region. As a result, researchers may have been overestimating how much the forest changes in the dry season.

“Scientists who use satellite observations to study changes in Earth’s vegetation need to account for seasonal differences in the angles of solar illumination and satellite observation,” Morton asserts. “During the dry season, the Sun slowly moves into position behind the satellite, allowing the sensor to take ‘perfect’ pictures of the forests. The seasonal change in greenness has nothing to do with how forests are changing.”

The findings could be important for understanding how Amazonia and other vegetated landscapes change from season to season and across years. Changes in forest cover influence how the planet recycles and stores carbon and water. Scientists also would like to model how global climate change can affect and be affected by forests. The new analysis was published in the journal Nature on February 6, 2014.

Morton and colleagues found that the timing and the amount of sunlight falling on the forest, combined with the angles of the satellite view, can create false “hot spots” in images. Essentially, the forest looks greener because the angles between the Sun, the satellite, and the forest can focus light more in certain parts of an image. This becomes a systematic problem when multiple days of observations are combined and averaged because the satellite acquires more usable images of the forest in the dry season—when there is less cloud cover—than in the rainy season, when clouds often block the view.

The natural-color satellite image at the top of this page shows one aspect of the problem. Acquired by the Moderate Resolution Imaging Spectroradiometer (MODIS) on NASA’s Terra satellite on October 3, 2002, the image shows a portion of the Amazon rainforest during the dry season and near the time of the solar equinox. Hotspots appear in the image from the alignment of solar illumination and sensor observation angles. On the left side, sunlight is scattered back toward MODIS by the leaf canopy of the forest, creating the appearance of brighter green in some areas. On the right side, the reflection of sunlight off the Amazon River and surrounding flooded wetlands makes the water appear silver to white next to darker forest.

As the MODIS sensor scans east and west to image the Earth, the Sun is directly behind the sensor (backscatter) or the sensor is facing the Sun (forward scattering). The difference in these halves of the image will be familiar to a photographer; to minimize the effect of shadows, we tend to take photos with the Sun at our backs instead of facing it. Such angular effects in a satellite image can distort measurements of forest “greenness” (what scientists call the enhanced vegetation index, or EVI) when those measurements are compiled over days and seasons.

Another problem is the shadows cast by the very trees that scientists are trying to measure. Around the time of the solstice (June), the Sun is as low on the horizon to the north as it will get and shadows are abundant. By late September, around the time of the equinox, Amazon forests are illuminated from directly overhead; the satellite is looking down along the same plane. This makes a difference in the light reflected and scattered back to MODIS from the forest. With long shadows in June, the forest may not appear as bright, even though it is the end of the wet season. Meanwhile, in September and the dry season, the reflection of light—particularly infrared, which is important for vegetation indices—is more intense. 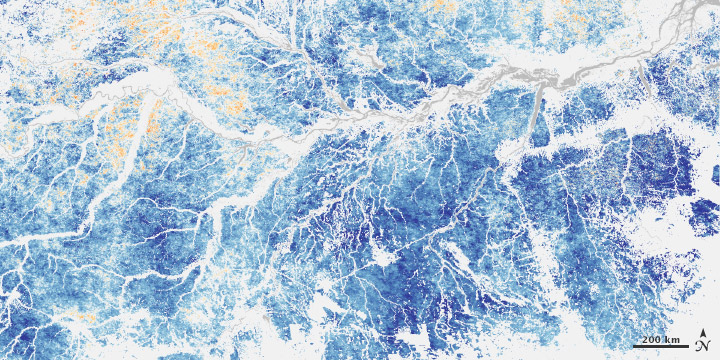 There are already some scientific techniques to correct for reflectance by the atmosphere and land, as well as for the angles of the satellite view, but none that accounts for the changing angles of sunlight on short to medium time scales. Morton and colleagues have developed algorithms and tools to compensate for the lighting hot spots and shadowing effects in satellite pixels. The map above is based on that model and depicts the difference in the amplitude of seasonal greening between the uncorrected and corrected vegetation cover (EVI) data from 2003 to 2008. Blue areas show where MODIS sensors and the vegetation models can overestimate changes in Amazon forest structure and reflectance properties during the dry seasons. White areas do not have forest cover.

“While previous work has considered the influence of directional reflectance with time, this paper demonstrates that correction to a constant Sun angle removes much of the variability that has been interpreted as changes in productivity,” said Scott Goetz, a forest ecologist at the Woods Hole Research Center who was not involved with the new study. “Additional work is needed to verify these results with field measurements, and to explore the influence of drought on corrected vegetation indices, but past interpretations of productivity changes need to be reconsidered in light of these new results.”

A new analysis shows how changes in the angle between the Sun and a satellite sensor interact to create the illusion of Amazon forest greening during the dry season.