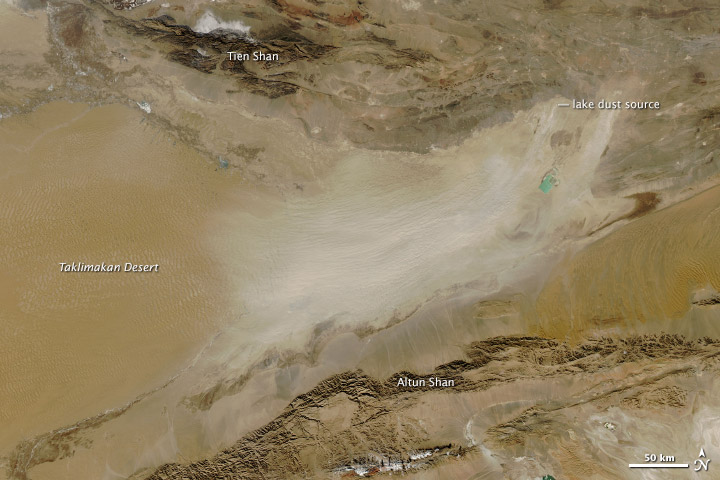 The Taklimakan Desert is beautiful in its desolation. Very little grows in this basin desert, leaving exposed the textures of the landscape. Shifting sand dunes ruffle the center of the basin, which is framed by craggy, dark-colored mountains. Lined with channels carved by melting snow, smooth alluvial plains fan out from the base of the mountains.

But not all of the geology is visible. On February 1, 2014, when the Moderate Resolution Imaging Spectroradiometer (MODIS) on NASA’s Aqua satellite acquired this image, one of the region’s frequent dust storms swept across the basin, obscuring the ground below.

Ironically, water is connected to the source of the dust. As seasonal lakes dry out, they leave a layer of fine mineral soil. The dust in this image originates from a few such dry lakebeds on the northeast side of the basin. Once airborne, the dust spreads and becomes more diffuse towards the west. The continual evaporation and refilling of lakes has led to a buildup of mineral salts in the Taklimakan Basin. The square turquoise feature near the source of the dust storm is probably an evaporation pond used to dissolve and then extract mineral salts from the desert.

The pond is the only obvious sign of a human presence in the desert, but a few people do live in the region. Patches of green and dark brown along the rivers are irrigated croplands. Snowmelt is the only source of water for agriculture. The tall mountain range in the north—the Tien Shan—blocks Arctic storms and prevents rain or snowfall during the winter. Mountain ranges to the south, the Kunlun and Altun Shan, block potential rainstorms from the Asian monsoon. And, of course, the basin is deep inland and far from moist ocean air. As a result of this geography, the Taklimakan is exceptionally dry, receiving less than 10 millimeters (0.4 inches) of rain in the center of the basin, though more falls at the base of the mountains. 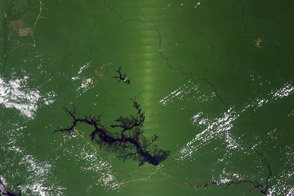 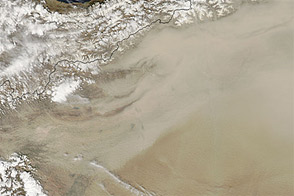 Dust ringed the Taklimakan Desert of northwestern China when this true-color satellite image was taken on April 25, 2010.