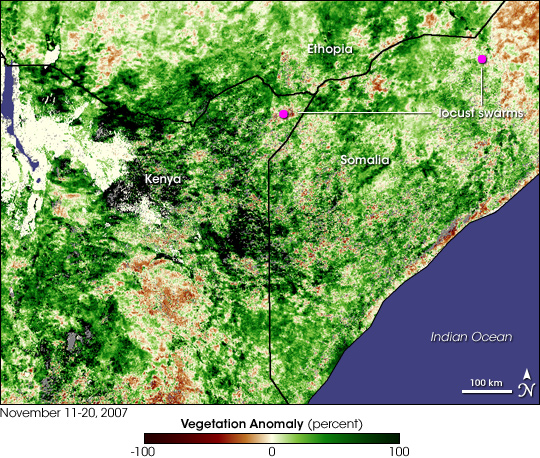 “For the first time since 1961, several desert locust swarms invaded northeastern Kenya,” reported Locust Watch, a branch of the Food and Agriculture Organization of the United Nations, on December 3, 2007. Swarms of locusts are dangerous because they can move quickly over long distances, destroying crops and all other plants growing in their path. Locusts form densely packed groups, or swarms, when an ample supply of food and water allow a large number of the insects to hatch and breed. Because swarms tend to form in remote parts of Africa and southwest Asia, scientists use satellite data to identify areas where conditions are right for desert locusts. This image illustrates why locusts were able to invade Kenya in 2007.

The image shows vegetation conditions as observed by the SPOT satellite between November 11 and November 20, 2007. By observing how much light plants are absorbing for photosynthesis, the satellite records how thick and leafy the plants are and how much they are growing. This image compares measurements taken in November 2007 to average measurements observed during the same period in 1998 through 2002. Areas of dark green throughout northern Kenya are regions where plant growth was above average. Unusually heavy rains throughout much of East Africa left the region lush with vegetation and provided a source of food for the insects in northern Kenya. The locations where Locust Watch reported swarms have been marked with a magenta dot.

The swarms observed in Kenya and Somalia contain between 40 and 80 million locusts per square kilometer. The desert locust is typically a shy, solitary insect, but in a crowd, it becomes a different creature. It changes from brown to yellow, and from shy to aggressive. Swarms of locusts can migrate more than 130 kilometers in a day, and just part of an average swarm can eat the same amount of food in one day as about 10 elephants or 25 camels or 2,500 people. The swarms that invaded Kenya and Somalia have laid eggs that will hatch during December. If the bands of young locusts aren’t contained, they could grow into swarms that are expected to move south through Kenya, said Locust Watch.