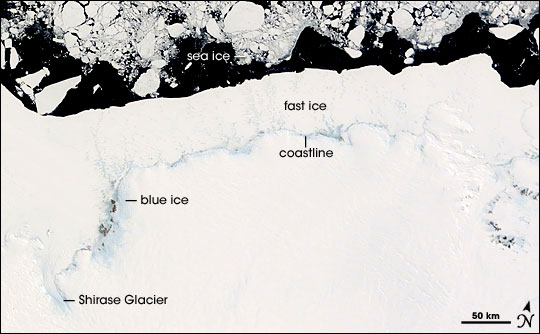 Ice fringes the coast of Antarctica, but not all of that ice looks or acts the same. This cloud-free view of East Antarctica’s Prince Olav Coast, acquired by the Moderate Resolution Imaging Spectroradiometer (MODIS) on NASA’s Terra satellite on November 12, 2007, shows a few types of ice along the Antarctic coast.

Near the lower left corner of the image, Shirase Glacier flows out to sea, forming an ice tongue that floats on the water’s surface. Shirase occupies a glacial valley, and the line where the land ends and the ocean begins is obscured by this river of ice.

East of Shirase Glacier, the coastline is easy to discern, visible as a faint blue line. Bare rock appears in places, and along the coastline, much of the ice is blue ice—pure ice composed of large crystals. Ice absorbs a tiny amount of red light and large ice crystals make this red-light absorption visible to human eyes (whereas tiny snow crystals do not), giving the ice a blue hue. Both the rock outcrops and the blue ice owe their origin to the same phenomenon: wind.

Antarctica’s katabatic winds begin as cells of heavy air in the continent’s high-altitude interior. As they slide downhill toward the coast, the winds look for routes of minimal resistance, so they avoid both areas of high atmospheric pressure and landforms with high elevation. Channeled through areas of low pressure and low elevation, these winds intensify, reaching hurricane force. In this area, the steepest elevation drop occurs at the coastline, and this is where both windswept blue ice and bare rock appear. Bare rocks appear as dots of gray-brown.

Just off the coast, fast ice clings to the coastline. Common along shallow ocean shelves near coastlines, fast ice derives its name from the fact that it holds fast to the shore, not moving with winds or currents. Farther out to sea, sea ice floats over the ocean surface. Although similar in origin to fast ice, this ice does move with winds and currents, and the broken pieces attest to its transient nature.

For an additional view of this area, see the Shirase Glacier and Lutzow-Holm Bay as observed by the Multi-angle Imaging SpectroRadiometer in September 2002.