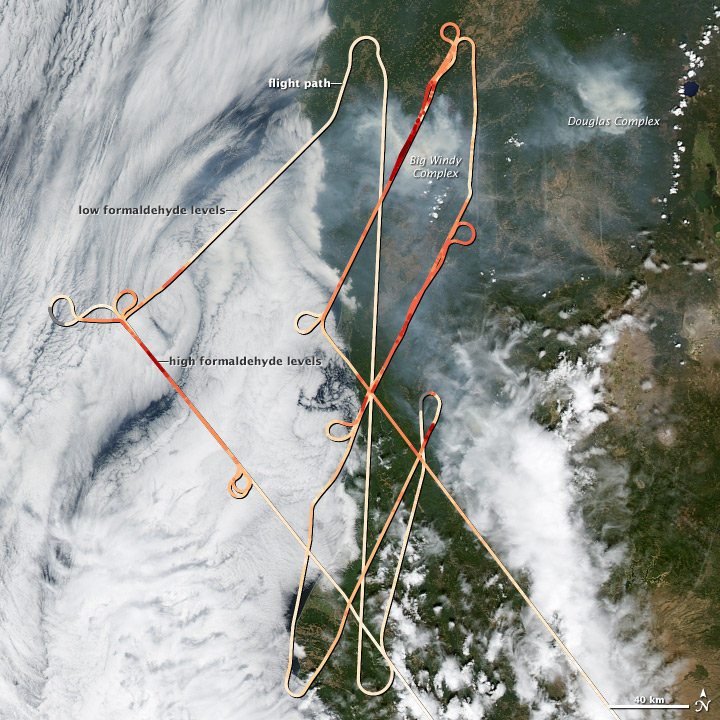 In the past few years, NASA scientist Tom Hanisco has been hunting for formaldehyde, a carcinogenic air pollutant common in smoke. A byproduct of combustion, formaldehyde affects human health and also has significant—but little understood—effects on Earth’s atmosphere. For instance, chemical reactions that break down formaldehyde in the lower atmosphere can produce small airborne particles that have an outsized influence on Earth’s climate. Other reactions involving formaldehyde affect the production of ozone.

Hanisco’s tool for tracking the short-lived and elusive pollutant is a lightweight aircraft sensor he developed at NASA’s Goddard Space Flight Center. Called the In-Situ Airborne Formaldehyde (ISAF), the sensor uses lasers to measure the abundance of formaldehyde in the atmosphere.

ISAF is one of 28 sensors mounted on NASA’s DC-8, a research airplane used in the NASA-led SEAC4RS field campaign, which stands for Studies of Emissions, Atmospheric Composition, Clouds and Climate Coupling by Regional Surveys. The campaign began in August and will continue through the end of September. The broad goal is to investigate how the combination of summer storms and pollution from wildfires, cities, and other sources affect air quality and the workings of Earth’s climate.

During the first science flight on August 6, 2013, scientists targeted smoke plumes emanating from a cluster of large wildfires in northern California and southern Oregon, including the Big Windy Complex. When the DC-8 reached the smoke, pilots performed a series of maneuvers that brought the aircraft directly through the smoke numerous times at various altitudes.

As shown in the map above, ISAF detected sharp elevations in formaldehyde, which increased from background levels of 1 to 5 parts per billion in clear air to about 80 parts per billion within the plume. Especially high formaldehyde levels were detected near the Big Windy Complex and off the coast of California, over a deck of low-lying stratus clouds. Where pilots flew overlapping flight paths at different altitudes, only the highest values are shown above.

Hanisco is paying particular attention to the altitudes where formaldehyde shows up in the ISAF data. In some circumstances, formaldehyde produced near the surface can rise fairly high in the atmosphere, where it has the most potent impact on climate. However, atmospheric models struggle to simulate how this vertical transport works. Missions like SEAC4RS should help clarify this and improve the models.

During the August 6 flight, ISAF found elevated formaldehyde concentrations between 5,000 and 10,000 feet (1,500 meters to 3,000 meters), not especially high for wildfire emissions. Hanisco notes that strong updrafts from thunderstorms or from pyrocumulus clouds can easily loft pollutants like formaldehyde to three times that height.

“We would love to sample the outflow from a thunderstorm or a pyrocumulus event during a SEAC4RS flight,” said Hanisco. “But it’s most important that we sample a wide variety of events. We’re going to compare the chemical reactions that happen within new smoke plumes, old plumes, wet plumes, dry plumes, calm plumes, and turbulent plumes.”

SEAC4RS, the most complex NASA airborne science campaign of the year, will be conducted from Houston’s Ellington Field, which is operated by the agency’s Johnson Space Center. Aircraft and sensors will probe the atmosphere from top to bottom at a time of year when weather systems are sufficiently strong and regional air pollution and natural emissions are prolific enough to pump gases and particles high into the atmosphere. NASA’s DC-8 and ER-2 aircraft will both participate.

A sensor mounted on NASA’s DC-8 airplane measures concentrations of formaldehyde in the atmosphere. On August 6, 2013, the plane flew through plumes of wildfire smoke spiked with the carcinogenic pollutant.