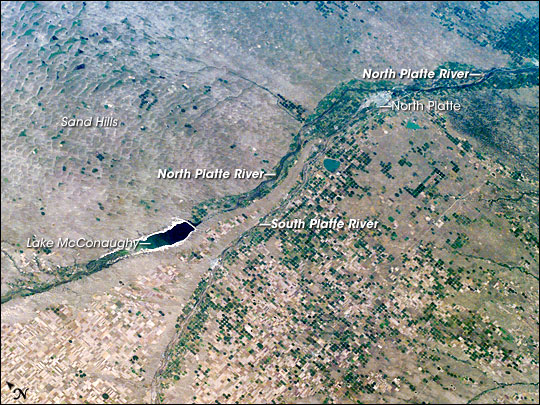 From a geographical perspective, the photograph demonstrates how the Platte River system has determined transportation and settlement patterns for centuries. Modern Highway 80 follows the North Platte, and Highway 76 follows the South Platte. The presence of transport routes and rivers—as sources of water in a semiarid region—in turn determine the location of towns: the city of North Platte stands out as a light gray area on the floodplain at the confluence of the North and South Platte rivers, as do two smaller towns, Gothenburg and Cozad, farther downstream (image top right).

The distribution of cropland visible in this image also reveals interesting geographical information about the characteristics of the land surface. The flattest surfaces are easiest to farm and have the highest density of farmed fields. These flat surfaces lie on the river floodplains, but are also present on the higher surrounding surfaces. Between the heavily cultivated land in the river floodplain and the uplands is a strip of rough country that is difficult to farm. As a result, it stands out as a gray strip running parallel to the green croplands of the floodplains.

The famous Nebraska Sand Hills, recognizable by their characteristic scalloped texture north of Lake McConaughty, are a hummocky sand dune field (now vegetated). According to the U.S. Drought Monitor, westernmost Nebraska was abnormally dry in the last three months—covering the time when this image was taken (September 5, 2007). The impact of the water deficit on grass cover can be seen in the image: dry areas are brown (image lower left), and moister areas farther east are greener (image right).

Astronaut photograph ISS015-E-27232 was acquired on September 5, 2007, with a Kodak 760C digital camera using a 70 mm lens.. The image was taken by the Expedition 15 crew, and is provided by the ISS Crew Earth Observations experiment and Image Science & Analysis Laboratory, Johnson Space Center. The image in this article has been cropped and enhanced to improve contrast. Lens artifacts have been removed. The International Space Station Program supports the laboratory to help astronauts take pictures of Earth that will be of the greatest value to scientists and the public, and to make those images freely available on the Internet. Additional images taken by astronauts and cosmonauts can be viewed at the NASA/JSC Gateway to Astronaut Photography of Earth.

Agriculture Patterns in the Great Plains

The grid-like pattern that spreads across the encompassing flatlands is typical of the Great Plains region and of Nebraska in particular.