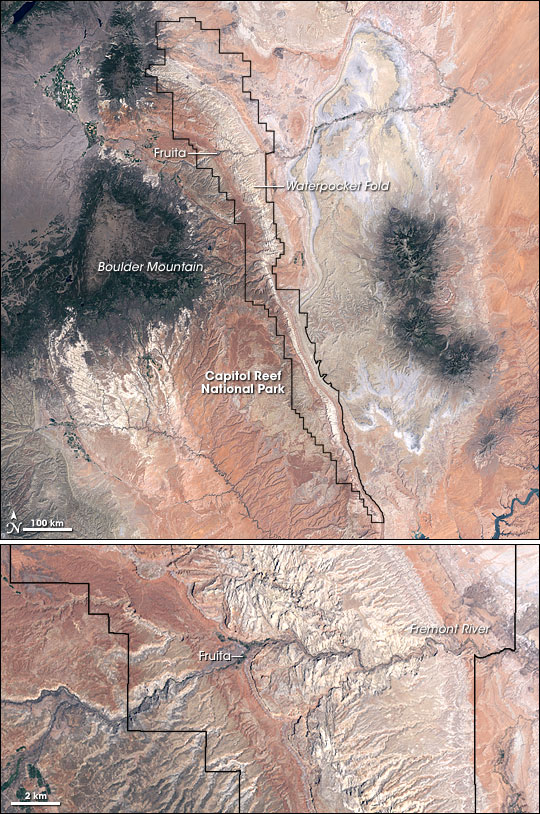 Capitol Reef National Park encompasses the Waterpocket Fold and the historic pioneer town of Fruita. The Waterpocket Fold is a 160-kilometer (100-mile) ridge running north-south in southern Utah. The park takes its name from one of the most interesting rock formations along the ridge: Capitol Reef. At the summit of the ridge, which runs through the center of this image, sit distinctive White Navajo Sandstone formations shaped like capitol domes. The ridge is called a reef because the steep cliffs block travel across land, like a coral reef impedes ships.

The Waterpocket Fold is a monocline, a single-sided fold in the rocks, like sheets draped over the edge of a bed. Sixty million years of erosion have exposed the folded layers of rock. The youngest layers are on the west (left) side of the fold, and the oldest are on the east (right). Piles of rounded lava boulders lie atop the westernmost layers. These boulders eroded from Boulder Mountain, a volcanic plateau to the west, which is capped with dark green vegetation. Waterpocket Fold was named for the deep potholes in the canyons that may hold water for months after a rainstorm.

Only four canyons cut all the way through the Reef, including the Fremont River Canyon. In the early 1880s Mormon settlers established the town of Fruita along the Fremont River and planted fruit and nut orchards. Fruita never grew larger than 10 families, and privately owned land in the town was gradually bought by the National Park Service after the establishment of Capitol Reef National Monument. Historic buildings and orchards are currently maintained by the Park Service, which allows fruit-picking in season.

This image was acquired on June 6, 2000 by the Enhanced Thematic Plus sensor aboard Landsat-7.

NASA image by Robert Simmon, based on data from the University of Maryland Global Land Cover Facility.