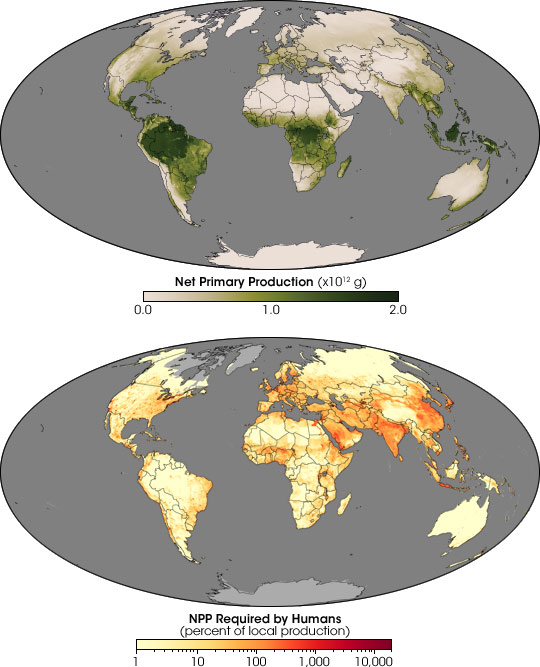 From the food we eat, to the lumber for our houses, to the fuel in our cooking fires, humans all over the world are dependent on plants. Among the many ecological uncertainties confronting us today is whether the productivity of Earth plants will be able to sustain us in the future, given current trends in population growth and patterns of consumption.

One way scientists are studying this question is by comparing nature’s plant supply to human demand. Using satellite observations of annual maximum vegetation combined with weather data and models, a team of scientists led by Marc Imhoff at NASA’s Goddard Space Flight Center, created a global map (top) of annual average net primary production, the amount of plant material (trunks, leaves, roots, branches) available in a location. Values range from zero to 2 trillion grams. Not surprisingly, the greatest production is found in the tropics, where dense forests filled with many layers of plants thrive.

Imhoff and his colleagues compared net primary production to statistics gathered by the United Nations Food and Agriculture Organization on how much plant material (for example crops, wood, fiber) different regions consumed. The second map illustrates the amount of net primary production (plant materials) consumed as a percent of local production. In many areas, human consumption far exceeds what the local environment can provide. Densely populated countries, such as India and China, often consume more than 100 percent of locally available net primary production (NPP), but so do smaller countries in areas with naturally low production, such as Saudi Arabia. Even in productive areas like the eastern United States and Europe, demand exceeds local supply due to high levels of per-person consumption.

Imhoff and his colleagues speculate that the ratio of human consumption to regional net primary productivity could be an indicator of locations that are particularly vulnerable to supply disruptions, for example, as a result of natural disasters or civil unrest. Combined with models of the impacts of climate change, these models could also help countries predict the biosphere’s ability—or inability—to sustain their population’s consumption levels in the future.

To read more about how this team of scientists is studying the relationship between plant supply and human demand, read the feature article Can Earth’s Plants Keep Up With Us? on the Earth Observatory.

Image by Jesse Allen, based on data from NASA’s Socioeconomic Data Center.